The Tea Party Governor Backlash of 2014 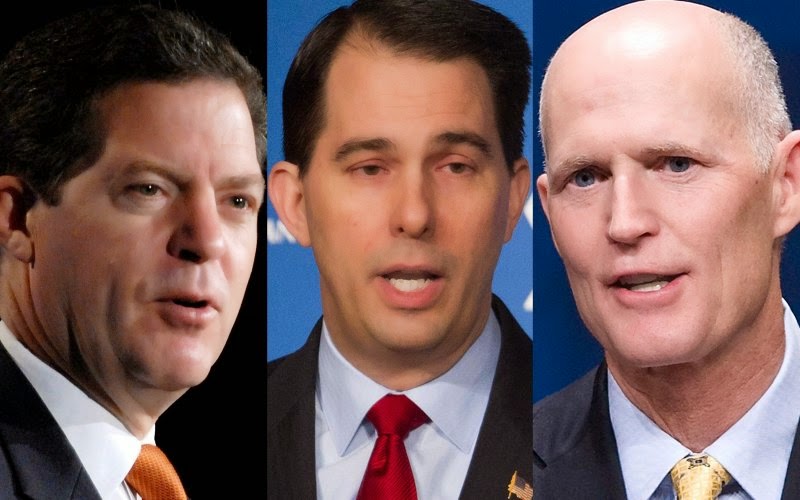 While Republican continue to believe that 2014 will be a banner year for them - in the House because of horrifically gerrymandered districts that ensure GOP control - and the less than fortunate mix of Senate seats for Democrats up for re-election.  But, all may not be going as glowingly well as Fox News and right wing pundits like to imagine.  As in all elections, turnout will be critical and it remains possible that GOP excesses will galvanize the Democratic base to vote in stronger numbers than some expect.  A piece in The Daily Beast looks at some potentially embattled Republicans who may be held accountable for Tea Party obstructionism and efforts to destroy the social safety net while disenfranchising minorities.  Here are excerpts:

[D]on’t believe the hype about 2014 being a Republican wave election. Something more complex is going on. Democrats are doing much better than they have a right to expect in the South, especially with family brand names like Landrieu and Pryor. Mitch McConnell even has an improbably tight race on his hands in Kentucky against Alison Lundergan Grimes.

More to the point, Democrat Kay Hagan looks strong in North Carolina, where the Tea Party wave of 2010 brought otherwise unified Republican control to this increasingly purple swing state. The state legislative excesses have been bad enough that GOP Governor Pat McCrory, the former mayor of Charlotte, found himself described as a “moderate among Wingnuts” by The Economist, which detailed his travails this way: “Unlike the pragmatic conservatives who have long dominated state politics, the Republicans now in charge are culture warriors…The governor found himself passing laws to ban sharia (Islamic law), restrict abortion and introduce strict voter-identification rules, which are being challenged by the federal government.”

Here’s where a slumbering national theme for 2014 starts to come into sharper relief. This year represents the first time local voters have been able to weigh in on the statewide elected officials who rode the Tea Party wave to victory in 2010. So while the Senate sucks up all the oxygen, the governors’ races might really reflect the mood of the electorate more accurately.

Seen through this lens, a pattern starts to emerge. Wisconsin’s Scott Waker is frequently talked up by RNC types as a leading 2016 contender, but he’s fighting for his political life at home, beset by a tsunami of scandals and running neck and neck with Mary Burke. Walker’s most-favored Midwestern governor status in D.C. is in trouble despite a misguided arrogance born of his surviving a recall attempt. His efforts to rein in the public sector unions have been successful, but his style and tone—and did I mention scandals—could make him an unexpected loser on Election Night.

In Kansas, Sam Brownback should be cruising to an easy reelection in one of the reddest states in the nation. But the theocon is trailing Democrat Paul Davis because of Brownback’s RINO-hunting purges, social conservative crusades, and what is becoming something of a Waterloo for the idea that all tax cuts pay for themselves.

Florida’s Gov. Rick Scott was a Tea Party-wave fluke to begin with. An unlikely messenger for less-government libertarianism, Scott made his fortune by founding the hospital conglomerate Columbia/HCA, which is now best known for the running up the largest Medicaid fraud in the nation’s history . . . . Scott has struggled to connect with voters in the Sunshine State despite pumping his own dollars into the effort. He’s facing former governor Charlie Crist, a slippery former Republican now apparently liberated by running as a Democrat and quick to call out GOP orthodoxy on climate change and other issues that matter in a diverse state flanked by the sea on three sides.

Pennsylvania is purple personified, and Republican Gov. Tom Corbett is collapsing in the Keystone State. . . . . Stick a fork in Corbett, he’s done.

Maine’s odd governor, Paul LePage, was also an accident of the Tea Party wave . . . . has met repeatedly with members of a sovereign citizens militia group the FBI considers a domestic terrorist organization. He ain’t exactly a Maine-style centrist Republican. And the only reason he has anything resembling a prayer in hell of winning reelection is that Cutler and Democrat Mike Michaud are splitting a clear majority of voters who are anti-LePage and want to kick his butt out of office.

Rounding out the geographically diverse list is former congressman and current Georgia Gov. Nathan Deal, who sidestepped a congressional ethics inquiry by bailing out of the capital dome and still faces a far-closer-than-should-be-expected race from Jimmy Carter’s grandson, Jason.

So while the biggest story of the 2014 primaries was, by and large, the center-right Senate establishment beating back Tea Party radicals who would have gone down to defeat, à la Sharron Angle and Christine O’Donnell, on the statewide level there are comeuppances coming that undercut overheated pundit claims that 2014 will be a Republican wave election.

Beneath the tough Senate hand dealt to Democrats, there is a lot of swing voter discontent with Tea Party governors who failed to steer toward the center once in office. This dynamic will have an impact on other races and should serve as a reminder to both parties that extremism is a vice in American politics.

Here in Virginia, the defeat of Ken Cuccinelli and his fellow extremists in a complete Democrat sweep supports the author's premise.
Posted by Michael-in-Norfolk at Tuesday, August 26, 2014