Is It Hysterical to Prepare for War with Russia? 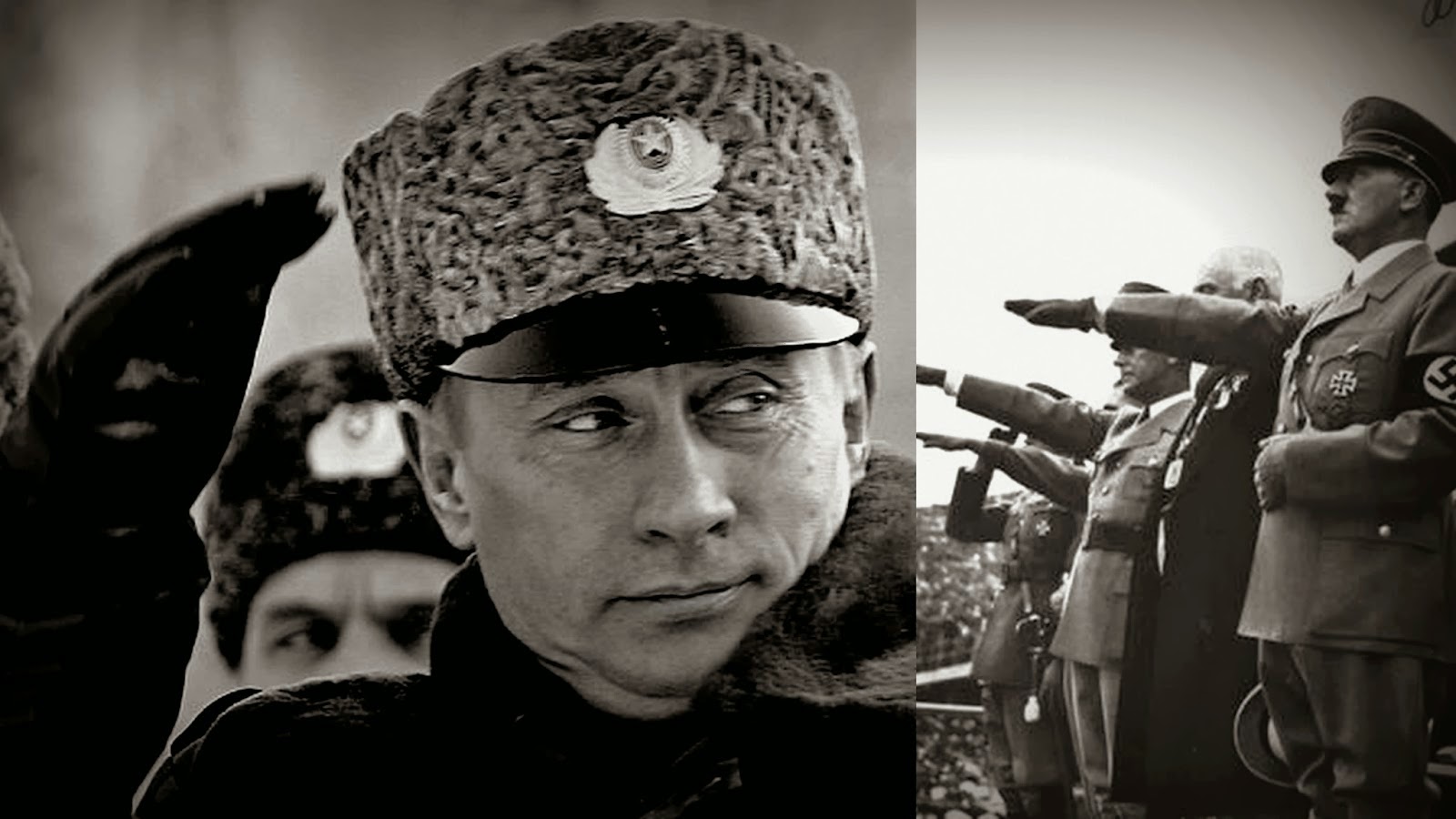 I have repeatedly voiced my sense of deja vu as I watch events in Ukraine and listen to the lies and hollow denials of Vladimir Putin.  The world has heard these story lines before, particularly in 1938 and 1939 when no one wanted to seriously the ravings of Adolph Hitler.  Like Hitler, Putin is a megalomaniac and seemingly suffers from delusions of grandeur, seeing himself as Russia's new tsar.  Just as frighteningly, he seems to be tacitly accepting some insane and terrifying statements by those who would unleash atomic war warfare in Eastern Europe.  A piece in Slate ask the question of whether it is naive to believe that Putin will not do something crazy that threatens world stability (such as it is).  Here are highlights:

WARSAW, Poland—Over and over again—throughout the entirety of my adult life, or so it feels—I have been shown Polish photographs from the beautiful summer of 1939: The children playing in the sunshine, the fashionable women on Krakow streets. I have even seen a picture of a family wedding that took place in June 1939, in the garden of a Polish country house I now own. All of these pictures convey a sense of doom, for we know what happened next. September 1939 brought invasion from both east and west, occupation, chaos, destruction, genocide. Most of the people who attended that June wedding were soon dead or in exile. None of them ever returned to the house.


In retrospect, all of them now look naive. Instead of celebrating weddings, they should have dropped everything, mobilized, prepared for total war while it was still possible. And now I have to ask: Should Ukrainians, in the summer of 2014, do the same? Should central Europeans join them?

I realize that this question sounds hysterical, and foolishly apocalyptic, to American or Western European readers. But hear me out, if only because this is a conversation many people in the eastern half of Europe are having right now. In the past few days, Russian troops bearing the flag of a previously unknown country, Novorossiya, have marched across the border of southeastern Ukraine.

The Russian Academy of Sciences recently announced it will publish a history of Novorossiya this autumn, presumably tracing its origins back to Catherine the Great. Various maps of Novorossiya are said to be circulating in Moscow. Some include Kharkov and Dnipropetrovsk, cities that are still hundreds of miles away from the fighting. Some place Novorossiya along the coast, so that it connects Russia to Crimea and eventually to Transnistria, the Russian-occupied province of Moldova. Even if it starts out as an unrecognized rump state—Abkhazia and South Ossetia, “states” that Russia carved out of Georgia, are the models here—Novorossiya can grow larger over time.

Russian soldiers will have to create this state—how many of them depends upon how hard Ukraine fights, and who helps them—but eventually Russia will need more than soldiers to hold this territory. Novorossiya will not be stable as long as it is inhabited by Ukrainians who want it to stay Ukrainian.

There is a familiar solution to this, too. A few days ago, Alexander Dugin, an extreme nationalist whose views have helped shape those of the Russian president, issued an extraordinary statement. “Ukraine must be cleansed of idiots,” he wrote—and then called for the “genocide” of the “race of bastards.”


Not long ago, Vladimir Zhirinovsky—the Russian member of parliament and court jester, who sometimes says things that those in power cannot—argued on television that Russia should use nuclear weapons to bomb Poland and the Baltic countries—“dwarf states,” he called them—and show the West who really holds power in Europe: “Nothing threatens America, it’s far away. But Eastern European countries will place themselves under the threat of total annihilation,” he declared. Vladimir Putin indulges these comments: Zhirinovsky’s statements are not official policy, the Russian president says, but he always “gets the party going.”


A far more serious person, the dissident Russian analyst Andrei Piontkovsky, has recently published an article arguing, along lines that echo Zhirinovsky’s threats, that Putin really is weighing the possibility of limited nuclear strikes—perhaps against one of the Baltic capitals, perhaps a Polish city—to prove that NATO is a hollow, meaningless entity that won’t dare strike back for fear of a greater catastrophe. Indeed, in military exercises in 2009 and 2013, the Russian army openly “practiced” a nuclear attack on Warsaw.

Is all of this nothing more than the raving of lunatics? Maybe. And maybe Putin is too weak to do any of this, and maybe it’s just scare tactics, and maybe his oligarchs will stop him. But Mein Kampf also seemed hysterical to Western and German audiences in 1933. Stalin’s orders to “liquidate” whole classes and social groups within the Soviet Union would have seemed equally insane to us at the time, if we had been able to hear them.

But Stalin kept to his word and carried out the threats, not because he was crazy but because he followed his own logic to its ultimate conclusions with such intense dedication—and because nobody stopped him. Right now, nobody is able to stop Putin, either. So is it hysterical to prepare for total war? Or is it naive not to do so?

It is dangerous to cling to the hope that dictators are sane and rational individuals.  Hitler and Stalin made that very clear.
Posted by Michael-in-Norfolk at Saturday, August 30, 2014