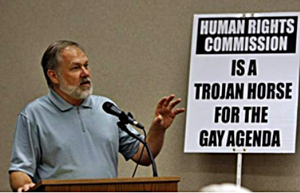 As noted frequently on this blog, one of the ugly fruits of religion - especially far right Christianity and Islam nowadays - is hatred of other and the desire to criminalize or kill those who do not subscribe to the frightening beliefs of these foul individuals and their cults.  For American Christofascists, one of the favored targets of their venom is the LGBT community and, as they lose the culture wars in America, their work to export their foul beliefs overseas, especially to ignorant and uneducated areas of the world such as Africa.  Now, in a stunning development, Scott Lively, who is believed to be an architect of Uganda's "kill the gays" bill has been ordered to stand trial in federal court for crimes against humanity for his anti-gay efforts.  Lively, of course, is only one of many "godly Christian" hate merchants and one can only hope that Lively will be convicted and that addition Christofascists will find themselves on trial down the road.  For too long Americans have refused to see conservative Christianity for what it is: a pernicious evil.  It deserves no special preferences under the law. Here are highlights from Gay Star News:

For the first time, a federal US judge has ruled a persecution of LGBT people is a crime against humanity.  This sets a precedent ensuring the fundamental human rights of LGBTI people are protected under international law.

It comes as a Ugandan LGBTI advocacy organization filed a lawsuit against prominent US anti-gay extremist Scott Lively.

Accused of helping to play a part in the persecution, arrest and murder of gay people in Uganda, Lively’s lawyers requested to dismiss the lawsuit. Michael Ponsor, the US District Judge in Springfield, Massachusetts, said: ‘Widespread, systematic persecution of LGBTI people constitutes a crime against humanity that unquestionably violates international norms.’

‘The history and current existence of discrimination against LGBTI people is precisely what qualifies them as a distinct targeted group eligible for protection under international law.  ‘The fact that a group continues to be vulnerable to widespread, systematic persecution in some parts of the world simply cannot shield one who commits a crime against humanity from liability.’

The lawsuit states Lively collaborated with key Ugandan government officials and religious leaders that allegedly resulted in the introduction of the ‘Kill The Gays’ bill.

The founder of Abiding Truth Ministries, Lively has made a career of stirring up anti-gay feelings in the USA and across the world.  He co-authored The Pink Swastika, which suggests ‘homosexuals were the truth inventors of Nazism and the guiding force behind many Nazi atrocities’ and the rainbow flag is a symbol of the ‘end times’. In 2007, Lively also toured 50 cities in Russia where he is accused of recommending a ban on 'gay propaganda'.

Frank Mugisha, director of Sexual Minorities Uganda, said: ‘Today’s ruling is a significant victory for human rights everywhere but most especially for LGBTI Ugandans who are seeking accountability from those orchestrating our persecution.’