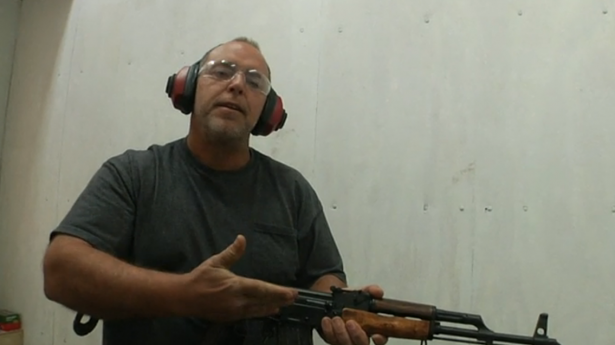 The right wing types really know how to pick "stars."  The more dysfunctional you are, the more celebrity you will have.  Sarah Palin is a perfect example of the phenomenon.  Now, a "star" of a gun nut reality show (he's pictured above) has been arrested for raping his 14-year-old daughter in a series of assaults that began with him taking her virginity at the age of 11.  Frankly, it's par for the course.  The more folks claim to laud "American values" and represent "real Americans" the more suspect they ought to be.  The Raw Story looks at this disturbing story.  Here are highlights:

The star of the Discovery Channel’s reality show Sons of Guns was arrested Tuesday on charges of aggravated rape of his daughter.

According to FoxNews.com, the East Baton Rouge, Louisiana Sheriff’s Department confirmed that Hayden is accused of raping his 14-year-old daughter in a series of assaults that began with him taking her virginity at the age of 11.

TMZ reported that Hayden’s daughter is backing up the allegations, claiming that her father forced her to participate in oral and vaginal sex “almost daily” for the past three years.

When asked why she didn’t report the sexual assaults earlier, the girl said that she was afraid her father would hurt her.  “Don’t tell them nothing,” he reportedly told her, “because I’m all you’ve got.”

The New Orleans Times-Picayune said, “On Aug. 9, Hayden was arrested and booked on molestation charges of a juvenile and crimes against nature. Hayden reportedly told TMZ that charge was sparked from an ex-girlfriend’s allegations. Red Jacket Firearms released a statement denying those allegations.”

At 6:30 p.m. on Tuesday, Red Jacket posted a notice on its Facebook page that said, in part, “Today, Red Jacket Firearms has received complete legal separation as an entity, from Will Hayden. We will continue to operate, although with heavy hearts and promise to do everything in our power to fill customer orders, back orders and provide support to those affected by these new developments.”

Posted by Michael-in-Norfolk at Thursday, August 28, 2014