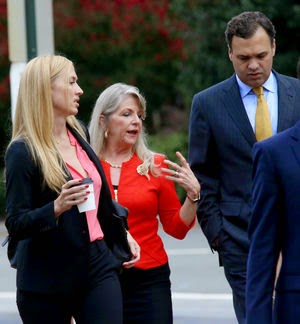 While thousands were at Norfolk's Town Point Park supporting marriage equality in Virginia, the federal criminal trial of former GOP governor Bob McDonnell and his wife Maureen continues to provide a case study in the type of marriages the Virginia GOP and the hate merchants at The Family Foundation want to protect.  Candidly, there seems to be little "sanctity of marriage" in the McDonnell's marriage and all too many of the marriages I witnessed during the "straight" phase of my life in a outwardly perfect high end neighborhood in Virginia Beach.  A column in the Richmond Times Dispatch looks at the ongoing spectacle of  back stabbing and throwing one's spouse under the bus that is one of the main theme of the McDonnell trial.  Here are excerpts:

The thread running through the testimony of prosecution and defense witnesses is that Maureen is volatile and insecure, if not unstable.


Depending on who’s asking the questions or who’s answering them, she embodies the rage of Lady Macbeth, the emotional frailty of Blanche DuBois, the blonde ambition of Eva Peron and the subtly of Snooki.

For 20 days, Maureen has quietly endured a carefully scripted trashing. Her freedom could depend on it.

Her husband of 38 years, the man with whom she held hands in public as a wife, first lady and co-defendant, now barely speaks to her. As the former governor squirmed past Maureen in Judge James Spencer’s courtroom Friday, they repelled each other — much as magnets do when their like poles are placed together.

Bob knows he’s in serious trouble; that getting out of it is serious business. He’s been in tight spots before — but politically. Each time, he successfully extracted himself on the strength of his on-cue earnestness, his talent for parsing words, and his deeply held belief that if he says something often enough, people will actually believe him.

There was Bob’s artful use in 2003 of a phrase heard often during his three days of testimony this past week on damning details of his backroom dealings with the protected-from-prosecution Jonnie Williams Sr.: “Not that I can recall.”

Eleven years ago, when Bob was chairman of the House courts committee, that was his response when asked whether he — as a married man with five children — had violated a since-scrapped prohibition on sodomy that was a factor in the doomed reappointment of a female judge accused by another woman of sexual harassment.

Possibly facing decades in prison and millions of dollars in fines, Bob — in his latest and riskiest charm offensive — is relying on these time-proven skills. But he is throwing in — or is that throwing out? — Maureen for good measure.

Bob lives for another day, but chivalry is dead.

This requires piling on Maureen — and requires that she take it. A reminder of that will be how closely, if at all, her lawyers question Bob. They’ll have a shot at him starting Monday, followed by prosecutors. And the feds are certain to have a slew of questions.

Further, Maureen’s continuing silence is interpreted as consent to the defense’s argument that she and Bob, their marriage having collapsed, were utterly incapable of communication.

Ergo, they couldn’t possibly conspire to trade on Virginia’s governorship for at least $177,000 in gifts, trips, cash and loans from Williams. A rich man, he was angling for state support of a supposed, tobacco-derived cure-all that, he hoped, would make him even richer.