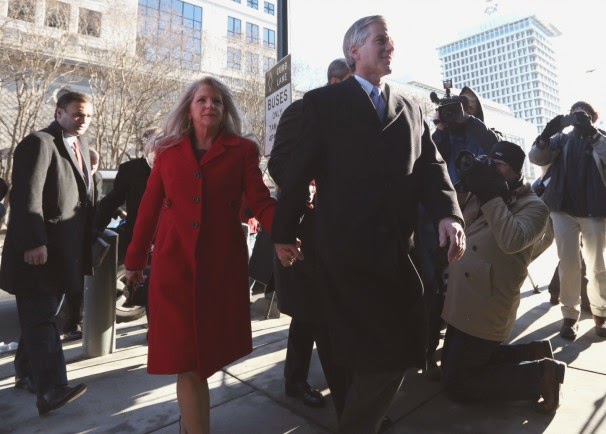 In political campaigns from the time he first ran for the House of Delegates, Bob McDonnell has always sold himself as a champion of "family values" and shamelessly prostituted himself to Christofascist organizations like The Family Foundation.   He has condemned gays and blathered about the "sanctity of marriage" and the biblical model of "one man and one woman" even though the Old Testament model for marriage is polygamy.  McDonnell has always been a huckster pandering to those who need someone to hate and look down upon so that they can feel better about their own small minded, often miserable lives.  The ongoing criminal corruption trial in Richmond has underscored just how phony McDonnell as been in the public persona he has marketed.  A piece in the Daily Progress looks at the fraud that McDonnell has proven himself to be all these years.  Here are excerpts:

We've been told for years by people like Gov. Bob McDonnell that allowing homosexuals to marry would mark the beginning of the end for Virginia's families and their values. Ironically, while we wait for the Supreme Court to rule on gay marriages, McDonnell is doing a fine job of destroying his own.

Whether Bob McDonnell's behavior as governor was legal or not will be decided by a jury, but no matter the verdict, receiving over $150,000 in loans and "gifts" from entrepreneur Jonnie Williams tarnished the public image of the office. With his testimony in the trial, McDonnell seems willing to break the covenant he made with his wife Maureen, and tarnish the image of his marriage, in an attempt to avoid prison. McDonnell's defense in the couple's public corruption trial appears to be centered on painting a picture of his wife Maureen as a nutbag who he was forced to placate while making apologies for her during his time in the Governor's mansion.

Bob McDonnell has been running on the issue of "family values" even before he was a candidate for any office. In his Master's degree dissertation at Regent University, McDonnell laid out the case for a Republican campaign on family issues as the best way to lead the country and win elections."

The traditional family is the cornerstone upon which Western civilization has been built, but changes in demographics, ideology, and political philosophy during this century have resulted in the decline in the strength of the family institution. … Republicans must stay consistently committed to their principles, communicate more effectively with the American public, and take bold action to restore the family to a position of strength in modern society."

During the Governor's race, McDonnell distanced himself from some of the more controversial statements he made in the paper, but his devotion to marriage never wavered. During his decade in the House of Delegates, he was a patron of a "Covenant Marriage" bill which would indicate he considered his own marital bonds to be stronger than a piece of government-issued paper.


Bob McDonnell failed his office and the people of Virginia. He's brought shame to himself and to our state. He can be forgiven for those mistakes, he's a human being. But failing his Covenant to his wife in an attempt to escape justice is indefensible. No matter how you vote, ask yourself if you would do the same?


Sadly, I believe that McDonnell is typical of the "family values" politicians in the Virginia GOP. They fear the Christofascists that they helped to empower in the Party and now lie and prostitute themselves simply to stay in office.  It is they, not gays and "liberals" who have no values, no integrity and no honor.