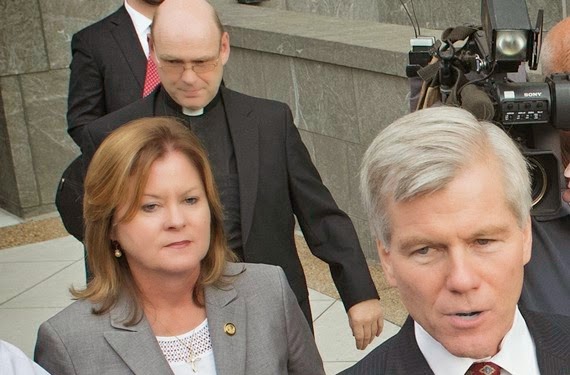 The night time soap opera aspects of the Bob and Maureen McDonnell criminal corruption trial just continue to go off the charts.  That McDonnell was ever seen as a rising star in the Republican Party shows just how bankrupt that party has become.  Now, on top of everything else, we find out that Bob "Taliban Bob" McDonnell has moved out of the family home and is living with a Catholic priest who was busted in Norfolk for public gay sex.  Seriously, it would be hard to make up stuff this good!  As Joe Jervis notes, one of McDonnell's first actions as Governor was to strip LGBT people of protection under a statewide anti-discrimination executive order, declaring that there is no evidence of such discrimination.  The Contributor has more details on this soap opera:

The following story most definitely falls into the "you can't make this shit up" category. Former Virginia Governor Bob McDonnell, now on trial for corruption as governor (and busy throwing his wife under the bus while rolling back and forth over her a few times, proving he's a complete cad as well as a sleazeball), has moved out of his home with Maureen and moved in with a priest: Rev. Wayne Ball of St. Patrick's Catholic Church in Richmond. Well, how about we meet the good Reverend (note: thanks to Ben "Not Larry Sabato" Tribbett for the tip on this one).

Yeah, it's this same guy.

The Rev. Wayne L. Ball, a Norfolk priest who pleaded guilty late last year to a misdemeanor sex offense, has been reassigned to St. John's Catholic Church in Highland Springs, according to The Catholic Virginian, a biweekly diocesan newspaper. The move is effective June 2.

Ball, 42, has served as pastor of Norfolk's Holy Trinity Catholic Church since 2000. The current pastor at St. John's, the Rev. David V. McGuire, will replace Ball at Holy Trinity.

In December, Ball pleaded guilty in Norfolk General District Court to the misdemeanor charge of frequenting a bawdy place. Norfolk police arrested Ball and a 41-year-old Richmond man on the night before Thanksgiving in a parked car in a Norfolk park. The judge continued Ball's case until July 8 and will dismiss the charge if the priest has no further criminal problems and completes 80 hours of community service by June 3. The man in the car with Ball received a similar deal.

Anyway, this is the priest - Wayne Ball - who "Homophobe Bob" McDonnell is now living with in a rectory in Richmond. Just when you thought this trial couldn't get any more soap opera-ish or bizarre...

P.S. Again, let me just emphasize that I don't have any problem whatsoever with Rev. Ball being gay. I do have a problem with Bob McDonnell spending his career telling everybody what's right and wrong sexually as well as who they can and can't marry; voting for anti-gay legislation; and generally being a homophobic jerk; and then moving in with a gay priest after moving out with his wife Maureen.