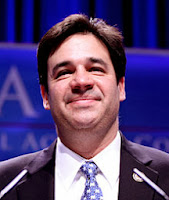 Proving once again that today's Republican Party is caught in the stranglehold of the Christofascists and hate groups like Family Research Council, etc., Republicans in the House of Representatives led by Raul Labrador (pictured above) have introduced a bill that would allow far right Christians to discriminate at will against those they deem offensive to their narrow, hate and fear based religious beliefs.  Naturally gays and also unmarried heterosexual couples "living in sin" are targets.  It's a recipe for chaos and arguably seeks to set up conservative Christianity as America's established religion.  So much for the U. S. Constitution and non-discrimination laws.  As I have repeated over and over again, the Christofascists are nasty, selfish, self-centered people who do not give a damn about the rights of others.  The rest of society needs to see them for the foul force in society that they are.  Think Progress looks at this dangerous batshitery.  Here are highlights:

A group of House Republicans, led by Rep. Raúl Labrador (R-ID), has proposed a new bill that would provide a nationwide “license to discriminate” against married same-sex couples. Though Labrador claims the bill protects “religious liberty,” it is nothing less than a blanket invitation to deny benefits to same-sex couples that they are entitled to under law.

According to the draft of the bill (HR 3133), there would be no consequences for any organization or individual that chooses not to recognize a same-sex marriage:


The Federal Government shall not take an adverse action against a person, on the basis that such person acts in accordance with a religious belief that marriage is or should be recognized as the union of one man and one woman, or that sexual relations are properly reserved to such a marriage.

Under the guise of “religious freedom,” this bill specifically endorses one particular set of religious beliefs without concern for any others, a pretty clear violation of the Establishment Clause of the First Amendment.

The consequences of this legislation would be immense, such that a few individuals could short-circuit the rights of gay and lesbian couples across the country. Given its prudish inclusion of opposition to premarital sex, these consequences could likely apply to many straight couples as well. Here are a few possible examples of the potential for abuse:

[T]he National Organization for Marriage has enthusiastically endorsed the legislation and the Heritage Foundation claimed it will “encourage tolerance.”

As for Rep. Labrador, one can only wonder how long it will be before we learn that he's been busted in a sting for soliciting a blow job in a rest room somewhere.
Posted by Michael-in-Norfolk at Saturday, September 21, 2013