GOP Nightmare: What Happens When Whites Are No Longer the Majority? 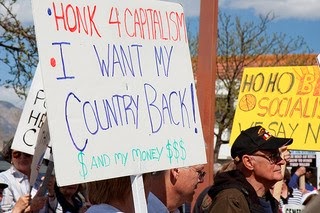 As noted many times, I am a former GOP activist and held a city committee seat in Virginia Beach for 8 years.  In the well over a decade since I resigned from the GOP due to the party's inability to separate religion (i.e., far Christianity) and the civil laws, things have gone from bad to worse.  During the same time period, the GOP has become increasingly racist.  True, we hear blather about non-whites being welcome, but the truth is it's not true as demonstrated by GOP efforts and elsewhere to (i) disenfranchise minority voters and (ii) block any meaningful immigration reform.  As the saying goes, actions speak louder than words and GOP actions show the lie to claims that the party is welcoming to all.   Indeed, the open racism of the far right is escalating and becoming more and more hysterical as the GOP base of aging far right, white Christians declines as other groups increase in number and influence.  A piece by a fellow Bilerico Project blogger looks at what is now the GOP's worse nightmare: when whites become a minority in America.     Here are excerpts:

The GOP is burdened with a base too steeped in racial denialism and resentment to allow Republicans to reach out to minority voters. Republicans have painted themselves into a corner through decades of appealing to racial fears and stoking the racial resentments of their base.

Staying in that corner is a one-way ticket to political irrelevance. Getting out of it is going to be messy.

How messy? Last weekend, Nina Davuluri became the first Indian American to be crowned Miss America. No sooner was the tiara on Davuluri’s head, then racist attacks against her popped up on Twitter. Some accused her of being an Arab, a Muslim, a terrorist, and even a member of Al Qaeda. Others claimed Davuluri -- who was born and raised in New York state, and whose parents who came to the U.S. 30 years ago -- wasn’t even an American.  It’s becoming a trend.

The over-the-top anger unleashed against Davuluri, President Obama and others on Twitter is fueled by a profound sense of loss felt by some white Americans. After the election, I described it as a loss of primacy -- the feeling of being “primary, preeminent, or more important” than other groups.

Anti-racist author and activist Tim Wise said during a 2011 CNN interview that cultural and economic changes have hit many white Americans particularly hard, financially and psychologically. White Americans who were taught that they would be rewarded if they worked hard, are now working harder than ever for less than ever. And increasingly whites are also sharing space in the unemployment line with “those people” -- black and brown people.

“For the first time since the Great Depression,” Wise said, “white Americans have been confronted with a level of economic insecurity that we’re not use to. It’s not so new for black and brown folks, but for white folks, this is something we haven’t seen since the Depression.”

That economic insecurity is compounded by demographic and cultural changes. As the country becomes more diverse, and more of our icons -- political leaders, celebrities, sports heroes, beauty queens, etc. -- are people of color, many white Americans feel as excluded from popular culture as they do from any economic recovery.

The face of America, and for white Americans it is no longer a reflection of their own. The definition of what it means to be an American is changing, and white is no longer norm.

For older white Americans who grew up in a time when America’s icons were virtually all white, this loss of primacy is an alarming development. Their alarm fuels at least some of the fury of tea partiers waving signs blaring “I want my country back.”

The election of Mitt Romney would have been a restoration of primacy. The re-election of Barack Obama, instead, confirmed the worst fears of white conservatives about where the country was headed and their inability to stop it.

The white-hot anger  . . . . is fed by an unreality that Republicans have preached to their base for decades.

Denialism -- the refusal to accept reality, established theory, facts, or evidence in order to avoid dealing with and uncomfortable or inconvenient truth -- comes in many varieties.

[T]he GOP spent decades stirring the pot of racial fear and resentment.  For a long time, it worked. Republicans could rely almost entirely on white voters to win elections. It may have worked too well.

What was an advantage is now a disadvantage. Running in all-white or nearly all white districts worked for Republicans, when white vote-share exceeded minority vote-share, and the party had a lock on the white working class vote. But, as Robert Brownstein pointed out in a recent National Journal piece, demographic trends have increased the minority vote share, while vote-shares of white groups the GOP has long relied upon have declined.

Instead of asking “Why don’t more blacks, Latinos, women, etc., join us?”, Republicans should ask “How are we failing to address the concerns of blacks, Latinos, women, etc., so that more of them will want to join us?” That’s a question that Republicans can’t ask, because answering would mean changing their tone and their policies. Republicans can’t do that without having the very same rage they encouraged in their base turned against them.

But if Republicans are to remain politically viable, that’s the question they have to ask and answer for themselves, however painful.

The GOP establishment set this train to disaster on course when far right, white Christofascists were welcomed into the GOP and then allowed to infiltrate county and city committees and caucuses.  The rise of the often openly racist Tea Party within the GOP merely accelerated the process.  At this point, absent sustained period of electoral losses, I do not candidly see how the GOP pulls out of its long term death spiral.
Posted by Michael-in-Norfolk at Saturday, September 21, 2013