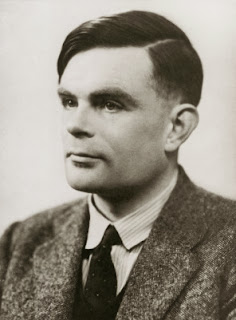 Homophobia and religious based anti-gay laws continue to cause untold tragedies for LGBT individuals.  The godly folk continue to leave in their wake a trail of damaged and/or ruined lives.  And because of religious based ignorance hate and bigotry, gays continue to lose their lives around the world.  And for what?  So that the falsely pious and those suffering from forms of psychosis can feel better about themselves or avoid facing the reality that their faith system is a false house of cards.  Among the lives destroyed by the pious and their political hacks is that of Alan Turing, the father of modern computer science and breaker of the Nazi enigma code.  Now, many years after Turing's prosecution for being gay and after his resulting suicide, the British government is considering a pardon for Turing.  Obviously, it's too little too late, but it is at least a recognition of past error.  Here are highlights from the Washington Post:

BLETCHLEY, England — A founding father of the modern computer, Alan Turing devised a machine that unraveled the enigma of Nazi codes and aided the defeat of Adolf Hitler. Convicted of homosexuality after World War II and sentenced to chemical castration, Turing — an avid fan of the film “Snow White” — was found dead in 1954 from cyanide poisoning, a bitten apple by his bedside.

More than half a century after his apparent suicide and following global strides in gay rights, a movement is cresting to reboot the record of the British mathematician’s short but luminous life.

Responding to a campaign by laureates such as Cambridge physicist Stephen Hawking, the British Parliament is moving toward granting Turing a posthumous pardon. The act would recognize the humiliation of one of computer science’s leading intellects who, after being sentenced by a British court to forced treatment with female hormones, became impotent and budded breasts before being found dead by his housekeeper in a lonely room near Manchester. Some academics are even calling for a reopening of the inquest that quickly declared his death self-inflicted, despite the lack of a suicide note.

The push comes amid a new swell of international attention for a man who scholars say made conceptual breakthroughs that laid the groundwork for everything from mainframes to ­iPhones.


“Every time you turn on your computer, every time you check your e-mail, every time you share a photo,” it is because of Turing’s concepts, said Teddy Schwarzman, producer of the “Imitation Game,” a multimillion-dollar biopic on Turing due out next year starring Benedict Cumberbatch and Keira Knightley.

Yet the campaign to pardon Turing’s 1952 conviction — which came after he acknowledged having a same-sex relationship and declared he saw nothing wrong with it — is also igniting a debate over the tricky business of rewriting history.

Opponents argue that what’s done is done and that a pardon could spark an avalanche of petitions from families of other deceased convicts whose punishments in their day now seem barbaric. Still others say the parliamentary proposal does not go far enough. If Turing is pardoned, why not the writer Oscar Wilde, the actor John Gielgud and the thousands of other less-notable Britons once punished for the love that dare not speak its name?

Since last year, living Britons convicted under the 1885 law that largely targeted gay men — popular myth says Queen Victoria did not believe lesbians existed — can apply for pardons. But Parliament has yet to extend the same right to families wishing to clear the names of dead relatives who were sentenced under the law — which was overturned in 1967 in England and Wales and 1980 in Scotland.

As Hitler’s blitz began raining fire on British cities a year later, Turing and others worked round the clock to turn the tide of the war by cracking Nazi messages encoded by the infamous Enigma machines. Even among the great minds gathered at Bletchley Park for the war effort, scholars say, Turing stood out.

“As one of his colleagues once said, it was a very good thing that the government didn’t know that Turing was a homosexual during the war, because if they found out, they would have sacked him and we would have lost,” said Lord John Sharkey, sponsor of the Turing pardon in Britain’s upper house.

It was not Turing - or others convicted under anti-gay laws - who committed a crime.  Rather it is the godly churchmen and political prostitutes in Parliament and other legislative bodies who committed crimes by falsely criminalizing others to protect their misplaced belief in myths written by ignorant herders over 2,500 years ago.  That so many suffered for ultimately no reason is a huge, huge crime.