Quote of the Day: Ken Cuccinelli is the Polar Opposite of Pope Francis 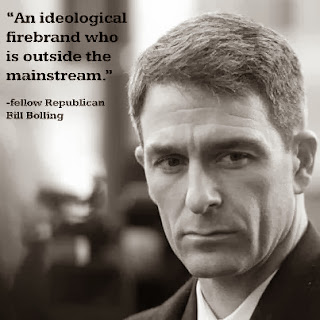 The previous post looked at some of the surprising and in some ways cataclysmic remarks of Pope Francis.  With election day here in Virginia fast approaching, Francis' remarks are especially relevant given GOP gubernatorial Candidate candidate Ken Cuccinelli alleged allegiance to his Catholic faith.  GOP demagogues Rick Santorum and failed VP candidate make similar disingenuous claims.  Blue Virginia sums up the hypocrisy of these Republicans - and horrible individuals well.  Here's the money quote:

I wonder what Ken Cuccinelli and Company have to say about this? While they're at it, I'd also love to hear their thoughts on the Pope's teachings that "the world's rich must do much more to wipe out vast inequalities between the haves and the have-nots," and that everybody "should be able to make a personal contribution to putting an end to so many social injustices."

In other words, Pope Francis' teachings, whether on economic fairness, social justice, or human sexuality, are the POLAR OPPOSITE of what Ken Cuccinelli, EW Jackson, Mark Obenshain, and the rest of the unhealthfully-sex-obsessed, LGBT-persecuting, women's-rights-depriving, soak-the-poor-and-enrich-the-wealthy Virginia Republican Party believe in. Not that they care, of course.

Cuccinelli epitomizes the hypocrisy of today's GOP and right wing Catholics who bear a striking resemblance to the Pharisees so roundly condemned in the New Testament.
Posted by Michael-in-Norfolk at Thursday, September 19, 2013