Starbucks to Gun Nuts: Don't Bring Your Gums on Our Property 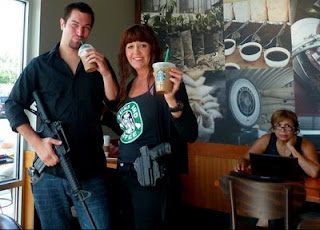 I make no effort to hide my disdain (contempt might be a better word) for most gun owners who, like the Christofascists, believe their rights trump the rights and safety of others.  It's all about them and f*ck everyone else.  It's an attitude I first saw years ago growing up in Central New York where hunters utterly ignored the "No Hunting" and "No Trespass" signs on my parents' property and made it dangerous for us to be out horseback riding on our own property.  Recently, gun owners have exhibited the same type of behavior by taking their guns with them into Starbucks' locations and frightening employees and other customers.  Again, like with the Christofascists, with gun owners, it's all about them.  Starbucks has reacted by telling them to stay out of its stores and off of its property.   Starbucks CEO Howard Schultz has issued a open letter to gun owners and will be taking out ads in major papers telling gun owners that they are not welcome if they bring weapons with them.  The San Francisco Chronicle has details:

Starbucks has always set itself apart by taking strong positions on progressive political issues. Now that reputation has landed the company in the middle of the heated national debate over gun laws.

On Thursday, the Seattle-based company will run full-page ads in major newspapers, telling customers that guns are no longer welcome in its cafes. But Starbucks is stopping short of an outright ban, exposing the fine line it needs to walk on a highly divisive issue.

"We are not pro-gun or anti-gun," CEO Howard Schultz said in an interview, noting that customers will still be served if they choose to a carry gun.

The move comes as the company finds itself at the center of a fight it didn't start. In recent months, gun control advocates have been pressuring Starbucks to ban firearms, while supporters of gun rights have celebrated the company's decision to defer to local laws. About a month ago, Starbucks shut down a store in Newtown, Conn., early to avoid a demonstration by gun rights advocates. They had planned to stage a "Starbucks Appreciation Day," bringing their firearms and turning the company into an unwitting supporter of gun rights.

Support for guns runs counter to the Starbucks image. The warm feeling Starbucks customers get when they're sipping lattes doesn't always come from the coffee. For some, part of the brand's attraction is the company's liberal-leaning support of issues such as gay marriage and environmental preservation.

Many states allow people to carry licensed guns in some way, but some businesses exercise their right to ban firearms. They can do so because their locations are considered private property. Starbucks isn't the only company that doesn't ban guns, but it has become a target for gun control advocates, in part because of its corporate image.

"This is a coffee company that has championed progressive issues," said Shannon Watts, founder of the gun reform group Moms Demand Action for Gun Sense in America. "They've positioned themselves about being about the human spirit — that was so at odds with this policy that allowed guns inside their stores."

Starbucks' mission statement is to "inspire and nurture the human spirit" and over the years, it has taken strong positions on a number of thorny issues. Earlier this year, the company banned smoking within 25 feet of its stores, wherever its leases allowed. The idea was to extend its no-smoking policy to the outdoor seating areas, regardless of state laws on the matter.

At the company's annual meeting in March, a shareholder stood to criticize Starbucks' support of marriage equality. Schultz told the man it was a free country and that he could sell his shares.

As for the "Starbucks Appreciation Days" being staged by gun rights advocates, it stresses: "To be clear: we do not want these events in our stores."

Several companies do not allow firearms in their stores, including Peet's Coffee & Tea and Whole Foods. Representatives for those two companies said there haven't been any problems with enforcing their gun bans.

I'm sorry, but I have absolutely no use or respect for  men who need a gun to feel like a man - and make up for feared inadequate penis size? - and/or women who need a gun because they see a "dangerous black man" lurking behind every bush.  Some of you know who you are.  If you don't want me to deem you to be white trash, then don't act like white trash.