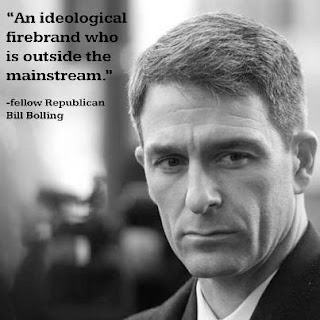 The Virginia Republican Party increasingly lives in some bizarre alternate universe dominated by Fox News, the heinous theocrats at The Family Foundation, strident gun rights advocates, Tea Party Neanderthals, and those from backward areas of Virginia.  The result?  The most extreme - dare we say insane? - GOP statewide ticket in Virginia's history.  And the ticket increasingly seems to be anathema to Virginia's most populous regions.  Everyone but one of Hampton Roads' seven mayors has endorsed Terry McAuliffe for Governor.   And Ken Cuccinelli seemingly is growing ever more toxic in Northern Virginia, especially among women voters.  As noted many times, Cuccinelli and his extreme ticket mates need to lose in November and lose big.  It may be the only thing that will save the Republican Party of Virginia in the longer term.  Jennifer Rubin (not always one of my favorite columnists) slams Cuccinelli in an op-ed in the Washington Post.  Here are highlights:

The polls show it. The shakeup in his campaign staff confirms it. Republican Ken Cuccinelli is losing Virginia’s gubernatorial race.

Sometimes when things aren’t going well, a campaign reorganization can help. But more often, it is just a case of rearranging deck chairs. The problem in Cuccinelli’s case is not who does what task in the campaign but rather the candidate’s inability to connect with voters beyond his hard-core base.

Cuccinelli has spent so much time attacking Democrat Terry McAuliffe — who, granted, is a juicy target — that he has failed to make himself the better alternative. McAuliffe may be a shady businessman, many voters concede, but why would Cuccinelli be any better as governor? He hasn’t answered that question.

Cuccinelli’s problems are exacerbated by McAuliffe’s sharp and omnipresent campaign aimed at women in Northern Virginia. The TV ads bombard voters with the message that Cuccinelli is hostile or indifferent to the concerns of today’s Virginia voters. Democratic ads slam him for opposing the Violence Against Women Act, opposing abortion even in cases of incest or rape, encouraging civil disobedience to oppose the Obamacare birth-control mandate (a view which Dems cast as anti-contraception) and championing a controversial “personhood” bill.

[O]nce elected, is he going to focus on his highly divisive agenda, one that obviously animates him? Cuccinelli hasn’t given them any assurance (e.g. I think Virginia has enough laws on the books). This in part explains the double-digit gap Cuccinelli faces with women.

The Star Scientific scandal also has been a drag on Cuccinelli, highlighted by his decision to give $18,000 (the value of disputed gifts) to charity. But the problem is broader than that.

Cuccinelli isn’t coming across as very likable or relatable. Opinionated? Yes. Experienced? Yes (voters say he’s got enough government service). But how does he do on the critical question of whether voters believe he really cares, if you will, about people like them (the key question on which Mitt Romney lost, 80 percent to 20 percent, against Obama)? Poorly.

Cuccinelli’s hard edges and confrontational approach appeal to national conservatives but are generally a turn-off in Virginia.

It’s unclear whether Cuccinelli can or will change that perception. He is, after all, hard-edged and confrontational. He is as anti-abortion as a politician can be without banning abortions altogether. He will fight with the Obama administration. Coming across as something different at this stage may only lead to claims of opportunism.

Cuccinelli supporters say McAuliffe is just as bad, in his own way. But he doesn’t come across as such to the average, non-ideological voter. . . . These days average voters, especially in Virginia, are in no mood for pols preaching ideology at a fever pitch.

This is a long way of saying that Cuccinelli isn’t a good fit for areas of the state with the most people. Maybe he can finally breakthrough, but for now McAuliffe is looking to voters like the lesser of the two evils.

Posted by Michael-in-Norfolk at Tuesday, September 17, 2013