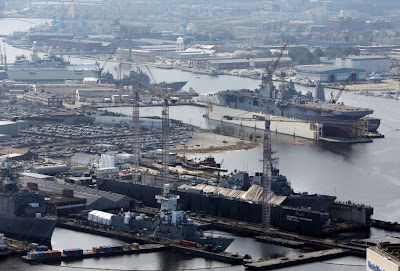 As I drive around the area, I am constantly amazed by the idiocy of many local voters, especially those who drive around with Tea Party license plates on the vehicles.  Why not simply have "I'm a cretin" or "I'm a racist" or "I'm a bigot" tattooed on their foreheads?  It would pretty much send the same message.  It is also noteworthy that driving through the Huntington Heights area near Newport News Shipbuilding, all of the GOP signs are in the yards of the blue collar homes while the homes of the well to do almost without exception have Democrat signs.  The blue collar set - which also seems to make up most of the Tea Party crowd - continually vote against their own economic interest motivated either by bigotry or racism or selfishness.  With the Congressional GOP about to force a government shut down and perhaps even a U.S. debt default, these idiots are setting the stage for Hampton Roads (and themselves) to take a huge financial hit.  The Virginian Pilot looks at the possible consequences for the region posed by the GOP saboteurs.  Here are excepts:

Even with Congress's deadline for budget compromise fast approaching, Hampton Roads' military community and defense industry have few clues as to whether the region will take a significant financial hit.

The top officers of the Navy, Marines, Army and Air Force are expected to press for more budget clarity and help in minimizing the effects of sequestration this morning when they make a joint appearance before the House Armed Services Committee.

Navy officials have warned that sequestration, which will require $14 billion in reductions next year, will have a direct impact on operations and maintenance but would not affect sailors' pay. Top officers have warned that ship maintenance projects - a lifeblood for the Hampton Roads ship repair industry - would be cut in half. Fewer ships would be built, two airwings could be grounded for three months, and shore construction projects will not be funded, the Navy said.

If no budget is approved, legislators and the White House could try to pass a continuing resolution to pay the bills for a few months while legislators continue talking. If neither happens, the government will shut down all nonessential services on Sept. 30 and remain closed until Congress reaches a deal.

Separately, the government, which borrows hundreds of billions of dollars a year and owes $16.7 trillion, is expected to reach its legal debt limit in mid-October. Congress will have to agree to a higher debit limit, or the government will be short of cash to pay the bills.

U.S. Sen. Tim Kaine said Monday that he's optimistic a last-minute deal will help the government avoid shutting down or hitting the debt ceiling because party leaders in both chambers don't want either to happen.

But the Virginia Democrat blames Republicans, particularly in the House, for not being willing to negotiate a budget plan. The House and Senate completed their proposed budgets months ago but have not set up negotiation sessions.

House Republicans contend the two sides "were too far apart so it's not even worth having a discussion. I vigorously condemn that rationale," Kaine said. "One side wins some items, the other side wins on some others. That's what you do."

Sadly, it will not be just the moronic Tea Party crowd that is harmed if the government shuts down or defaults on the nation's debts.  Millions of Americans will be harmed and the stock markets may yet again tank, wiping out many families' invested savings.