Pope Francis: Church Cannot "Interfere" With Gays and Must Not Obsess About Abortion, Contraception and Homosexuality 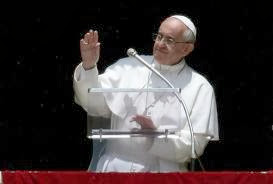 On his flight back from his visit to Brazil earlier this year Pope Francis made statements that sounded as if they might signal a softening in the Catholic Church's stance on gays and homosexuality.  Anti-gay members of the Church hierarchy rushed tot the forefront to state that nothing had changed and the Francis' comments should not be misconstrued to mean that any kind of doctrinal shift was occurring.  Now, a new 12,000 word interview with the editor in chief of La Civiltà Cattolica, the Italian Jesuit journal, Francis stated views and positions that must be giving many hard right elements of the Church hierarchy and Extreme Catholic organizations such as opus Dei and the Catholic League absolute apoplexy.   What did Francis say?  That the Church needed to end its obsession with teachings on abortion, homosexuality and contraception.  And much more, none of which is consistent with what one hears incessantly from Catholic pulpits across the world.

For a study of contrasts that Francis' comments underscores consider his words:

In Buenos Aires I used to receive letters from homosexual persons who are ‘socially wounded’ because they tell me that they feel like the church has always condemned them. But the church does not want to do this. During the return flight from Rio de Janeiro I said that if a homosexual person is of good will and is in search of God, I am no one to judge. By saying this, I said what the catechism says. Religion has the right to express its opinion in the service of the people, but God in creation has set us free: it is not possible to interfere spiritually in the life of a person.

“A person once asked me, in a provocative manner, if I approved of homosexuality. I replied with another question: ‘Tell me: when God looks at a gay person, does he endorse the existence of this person with love, or reject and condemn this person?’ We must always consider the person.

"Today, many evil forces have set their sights on the dissolution of marriage and the debasing of family life," Nienstedt said. "Sodomy, abortion, contraception, pornography, the redefinition of marriage, and the denial of objective truth are just some of the forces threatening the stability of our civilization. The source of these machinations is none other than the Father of Lies. Satan knows all too well the value that the family contributes to the fabric of a good solid society, as well as the future of God’s work on earth."

One can only assume that Nienstedt dropped to the floor in convulsions upon learning  of Francis' statements.  The same holds true for Brian Brown and the gay haters at the National Organization for Marriage and Catholic demagogues like Bill Donohue of the Catholic League.

Other bombshells in Francis' remarks that must be anathema to far right Catholis include the following:

“We cannot insist only on issues related to abortion, gay marriage and the use of contraceptive methods. This is not possible. . . . . “The dogmatic and moral teachings of the church are not all equivalent. The church’s pastoral ministry cannot be obsessed with the transmission of a disjointed multitude of doctrines to be imposed insistently. Proclamation in a missionary style focuses on the essentials, on the necessary things: this is also what fascinates and attracts more, what makes the heart burn, as it did for the disciples at Emmaus. We have to find a new balance; otherwise even the moral edifice of the church is likely to fall like a house of cards, . . .

[T]he proclamation of the saving love of God comes before moral and religious imperatives. Today sometimes it seems that the opposite order is prevailing. The homily is the touchstone to measure the pastor’s proximity and ability to meet his people, because those who preach must recognize the heart of their community and must be able to see where the desire for God is lively and ardent. The message of the Gospel, therefore, is not to be reduced to some aspects that, although relevant, on their own do not show the heart of the message of Jesus Christ.”

Women are asking deep questions that must be addressed. The church cannot be herself without the woman and her role. The woman is essential for the church. Mary, a woman, is more important than the bishops. I say this because we must not confuse the function with the dignity. We must therefore investigate further the role of women in the church. We have to work harder to develop a profound theology of the woman.

If one has the answers to all the questions—that is the proof that God is not with him. It means that he is a false prophet using religion for himself. The great leaders of the people of God, like Moses, have always left room for doubt. You must leave room for the Lord, not for our certainties; we must be humble. Uncertainty is in every true discernment that is open to finding confirmation in spiritual consolation.

“If the Christian is a restorationist, a legalist, if he wants everything clear and safe, then he will find nothing. Tradition and memory of the past must help us to have the courage to open up new areas to God. Those who today always look for disciplinarian solutions, those who long for an exaggerated doctrinal ‘security,’ those who stubbornly try to recover a past that no longer exists­—they have a static and inward-directed view of things. In this way, faith becomes an ideology among other ideologies.

There are ecclesiastical rules and precepts that were once effective, but now they have lost value or meaning. The view of the church’s teaching as a monolith to defend without nuance or different understandings is wrong.  . . . . “When does a formulation of thought cease to be valid? When it loses sight of the human or even when it is afraid of the human or deluded about itself.

“This church with which we should be thinking is the home of all, not a small chapel that can hold only a small group of selected people. We must not reduce the bosom of the universal church to a nest protecting our mediocrity.

“The church sometimes has locked itself up in small things, in small-minded rules. The most important thing is the first proclamation: Jesus Christ has saved you. And the ministers of the church must be ministers of mercy above all.

These random statements suggest that much of what Francis said is anathema to far right Catholics and members of the Church hierarchy like Nienstedt and the far too many like him.  The queation will be whether or not Francis, if he was sincere in his interview, will have the strength to stand up to those in the Hierarchy and the pews who prefer to disseminate hate and bigotry and who have made today's Catholic Church exceeding ugly.  If Francis is sincere, I hope that he will force reform and return the Church's focus to practicing the Gospel message rather than control and power over the lives of individuals.