Russia Capitulates and Amends Olympic Truce to Include Sexual Orientation 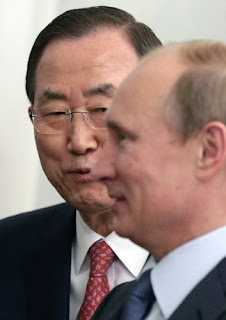 I cannot help but wonder if Vladimir Putin is regretting prostituting himself to the reactionary, gay hating elements of the Russian Orthodox Church but jumping on board the anti-gay laws pasted by the Russian Duma.  In addition to a constant drum beat of negative publicity, fears that American sponsors may reconsider their involvement with the 2014 Winter Olympics, Russia has now been forced to sign an Olympic Truce that guarantees non-discrimination on any basis, including sexual orientation.  The New York Times has coverage.  Here are details:

Every two years, the United Nations adopts a resolution called the Olympic Truce, a perfunctory statement that invokes the ancient Greeks and celebrates friendly competition and “the cause of peace.”


It usually passes with little deliberation. But not this year.

While world leaders grappled with the crisis unfolding in Syria, a lesser debate was unfolding at the United Nations over the truce . . .


The controversy was over a rough draft of the truce that mentioned a promise to include “people of different age, sex, physical capacity, religion, race and social status,” according to documents reviewed by The New York Times. It made no mention of gay or transgender people, a particularly sensitive omission given the uproar in the West over a Russian law that has been criticized as antigay.
United Nations representatives from around the world spent weeks pushing Russia to amend the language to include gay people, according to interviews with representatives from eight countries. This week, after extensive negotiations behind the scenes, Russia altered the truce’s language to say that it would “promote social inclusion without discrimination of any kind.”

Ban Ki-moon, the United Nations secretary general, said recently that the truce “may sound like something from the distant past that has no place in our times.” But he maintained that it was still relevant.


Past truces, including the one that Britain sponsored for the 2012 London Olympics, did not mention gay or transgender people. But this year, with global attention focused on the matter, countries are aiming to set a precedent of inclusion.

Russia’s law, signed by President Vladimir V. Putin in June, bans “propaganda on nontraditional sexual relationships.” It led to calls for protests and even some boycotts of the Sochi Games. The International Olympic Committee said it had received “strong written reassurances” from the Russian government that all would be welcome at the Sochi Games, regardless of their sexual orientation.

The United Nations is likely to vote on the truce in the coming weeks.

Overall, this should count as a much deserved major humiliation to Putin and Russia.
Posted by Michael-in-Norfolk at Sunday, September 15, 2013