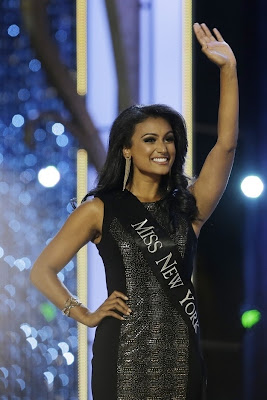 History was made Sunday night when Nina Davuluri, Miss New York was crowned the winner the 2014 Miss America Pageant. She is the first contestant of Indian descent to be crowned Miss America.  Among the other 12 contestants who advanced to the semi-finals of Sunday’s Miss America finale were Miss Kansas, Miss Florida, who wore a bejeweled knee brace, Maryland, Connecticut, Missouri, Oklahoma, New York, Wisconsin, Texas, California, Georgia and Minnesota.  Davuluri's win represents a reality: America is changing and white privilege is in decline.  The far right is going berserk as noted by The New York Daily News (I think it is safe to say these folks are not liberal Democrats):

What not everyone watching the Miss America pageant appeared to realize is that Nina Davuluri is American — or they just chose not to.

"How the f--k does a foreigner win miss America? She is a Arab! #idiots," one man tweeted just after the first winner of Indian descent was crowned Sunday night.

"If you're #MissAmerica you should have to be American," another woman wrote.
"9/11 was 4 days ago and she gets miss America?" chimed another man who later likened her to a photo of a Middle Eastern man wielding a firearm.

In consequence, the 24-year-old from Fayetteville, New York, near Syracuse, spent part of her first press conference acknowledging the hate-spewed comments that followed.

The ugliness of the far right and those who deem themselves "real Americans" continues to become more foul and toxic by the day.
Posted by Michael-in-Norfolk at Monday, September 16, 2013

Mechanical complaint: Some of your text doesn't show up unless I highlight.