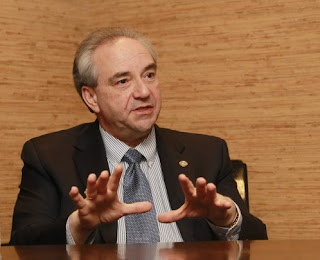 The Republican Party of Virginia has become a fetid swamp of insanity and the worse thing one can do in the eyes of the ignorant, unwashed party base - or the Central Committee which now acts more like a communist Politburo of old enforcing political orthodoxy - is to stand up for the need to recognize objective reality and the fact that to win, a political party cannot stray too far into crazy land.  Lt. Governor Bolling has therefore, committed a cardinal sin in his opposition to the carnival of insanity that is the Virginia GOP's 2013 statewide slate.  Yes, Bolling may be harboring sour grapes, but he hasn't totally surrendered to the Kool-Aid drinking that is now de rigueur for GOP membership.  The result?  A move is afoot to force him from the Virginia GOP central committee.  Here are highlights from the Washington Post:


Virginia Lt. Gov. Bill Bolling angered many Republicans when, after quitting the race for the party’s gubernatorial nod, he publicly mulled over an independent bid and then said he wouldn’t endorse anyone in the race.

That anger turned to fury over the weekend, when it appeared that Bolling had tried to help persuade an influential business PAC to support Democrat Terry McAuliffe over Republican Ken Cuccinelli II.

Now, some Republicans are urging the Virginia GOP to oust Bolling from the party.

The controversy began last week, when the political arm of the Northern Virginia Technology Council voted to endorse Cuccinelli. McAuliffe allies erupted in protest and launched a weekend of heavy lobbying to reverse the decision. According to two people with knowledge of events, Bolling was among those who called the PAC’s leader on behalf of McAuliffe.

It was seemingly the first indication that Bolling had taken an active role to promote the Democratic nominee in the governor’s race.

Now, leading Republicans say privately that they believe Bolling has essentially left the party. Some are urging the GOP to make that official by removing him from the party.

“I think his future as a candidate within the Republican Party as presently constituted is nil,” said Bob Holsworth, a former Virginia Commonwealth University professor and veteran Richmond politics watcher.

“I think what Bolling or others are hoping is that, if there’s a [Cuccinelli] defeat, the reaction among moderate Republicans would be so strong as to provide a new opportunity. He didn’t have a future from the time he started dissing Cuccinelli, and this is just an escalation of what’s been going on for the last couple of months.”

In March, McAuliffe said he would have a place in his cabinet for Bolling.  Bolling’s longtime political consultant, Boyd Marcus, shocked political observers last month by endorsing McAuliffe and going to work for his campaign.

Today's Virgina GOP is unrecognizable compared to what the party stood for back during my years as a City Committee member for the City of Virginia Beach.  Insanity and religious extremism are the rule of the day and moderates continue to flee the party - or at least those few that are left.  Voter need to understand that this is not the GOP that they or their parents grew up with.  It is something extreme, ugly and dangerous for both Virginia and the nation.

" ...fetid swamp of humanity ..." - Michael, I cannot stop laughing. But seriously, one of my few deeply conservative friends, a Richmond resident, and lifelong republican loyalist, is appalled at his own party. Seems to me the former GOP only can destroy itself - purging the crazies - to begin to remake itself.