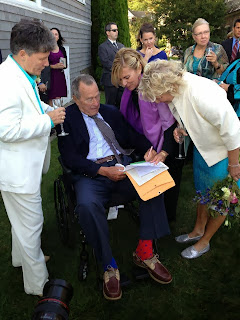 The freepers and Christofascists will be shrieking and unleashing sheets of flying spittle as they learn that former President George H.W. Bush acted as a witnesses at a same-sex wedding in Maine recently.  Maggie Gallagher, Bryan Fischer, Matt Barber, Tony Perkins and similar hate merchants will be literally beside themselves.  We'll give updates of the spittle flecked reactions as they go online.  The Washington Post looks at the senior Bush's attendance at the wedding.  Here are excerpts:

Former President George H.W. Bush and his wife Barbara served as an official witnesses Saturday at the Maine wedding of Bonnie Clement and Helen Thorgalsen, co-owners of a Kennebunk general store. Thorgalsen posted a photo on Facebook of the 41st commander-in-chief signing a set of documents for them at an outdoor celebration: “Getting our marriage license witnessed!”

No big statement from the ex-prez’s office. His rep Jim McGrath confirmed his and wife Barbara’s presence at the Kennebunkport wedding: “They were private citizens attending a private ceremony for two friends.”

In an e-mail from their honeymoon in London, Clement told us they’ve known the former first couple for years and were thrilled they accepted the wedding invitation. Thinking about “how monumental this time is in our lives” and “how blessed we are to be in their lives,” they decided to ask them “to really personalize it for us” as witnesses.

“This is such a wonderful time for change in our legal system,” she added. “Who would be best to help us acknowledge the importance of our wedding as our friends and as the former leader of the free world. When they agreed to do so we just felt that it was the next acknowledgment of being ‘real and normal.’” Clement, 60, said she and Thorgalsen, 55, have been together for 12 years, during which she helped raise her new wife’s now-adult daughters.


Kudos to George and Barbara Bush.
Posted by Michael-in-Norfolk at Thursday, September 26, 2013

you do realize, i hope, that if "Maggie Gallagher, Bryan Fischer, Matt Barber, Tony Perkins and similar hate merchants" are beside themselves, that they'll all be next to nothing?

They all need to become has beens and nothings. They are a blight on society. And they are certainly killing the Christian brand with the younger generations (which is a good thing).