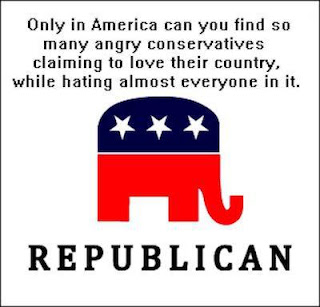 How do you reform and modernize a political party whose base is increasingly defined by the open - indeed, proud - embrace of ignorance and a rejection of all modern knowledge?  How does a political party lead the world's remaining super power when its base wants to govern according to Bronze Age understandings of the world and its place in the universe?  It's a huge challenge and one that frankly I do not see the Republican Party overcoming until the Christofascists elements in the party are kicked to the curb and exiled to the political wilderness where they belong.  Years ago the GOP establishment welcomed these insane elements into the party and now they are like a metastasizing cancer that needs to be eradicated.   A column in the Washington Post looks at the impossible mission whats left of the sane GOP leadership is facing.  Here are highlights:

It is often argued, including by me, that the GOP needs its own Bill Clinton or Tony Blair — a leader to reposition the party and reinvigorate its political appeal. But if these figures are examples of successful reform, British Prime Minister David Cameron is a warning of its perils.  Cameron set out to modernize the Conservative Party. He has found that not everyone is happy to be modernized.

Cameron’s embrace of environmentalism and gay marriage has also received criticism from older, less cosmopolitan party regulars. The quarrel has been fed by a (disputed) quote from a source close to the prime minister dismissing Tory activists as “swivel-eyed loons.”

The lesson for the Republican Party is sobering: A political coalition being stretched is at risk of being shattered.

For the GOP — beating against heavy demographic and generational tides — the attempt to modernize is unavoidable. In the next few elections, the ebb might be overcome with just the right presidential candidate, in just the right political circumstance. But in the long run, Republicans are borne away from power. There won’t be enough white and gray voters to win national elections.

The fundamentalist approach to reforming the GOP — an oversimplified Reaganism, advocated in the tone of Barry Goldwater — would only hasten the decline. It is an appeal to an electorate increasingly confined to Republican primaries.


Religious conservatives, for example, are the single largest constituency within the GOP, and compose about a quarter of the entire electorate. Such voters are not baggage thrown overboard to lighten the ship; they are planks in the hull. So the Republican Party is left with a challenge: It needs to become more socially inclusive without becoming socially liberal. Some think (or hope) that this is impossible.

The GOP will need to welcome new Americans and champion their economic and social mobility. It will need to remain true to the stable, pro-life convictions of its strongest supporters, while recognizing broad shifts taking place on gay rights among younger Americans, even within the Republican base. And it will need to speak to the concerns of working-class families who are the real swing voters in national elections.

But the Republican readjustment will also require a leader of a certain type. There is one combination that makes this transformation work at a national level: a reform-minded Republican who has the sympathy of religious conservatives.

[I]t is a creative response to the Republican reform dilemma to make religious conviction a source of outreach. And it might accomplish something Cameron has not: making the party’s base a participant in the party’s modernization.

Personally, I think the column's author is dreaming - is hallucinating a better word? - if he thinks the Christofascist GOP base  will cooperate with any form of modernization.  In 2012 the GOP's national platform was written by leaders of registered hate groups.  Those folks are literally insane in my view and logic and reason will get nowhere with them.  You don't put the mental ward patients in charge and then foolishly hope for a good out come.