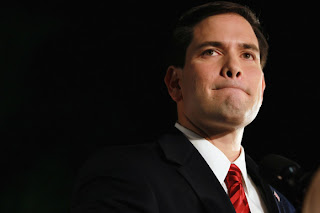 At times it is breath taking how out of touch members of the GOP can be when it comes to a total lack of empathy - or even concern for - many American citizens.   During the 2013 presidential campaign, Mitt Romney showed his true colors and contempt for "the 47%" who Romney depicted as lazy slackers.   Now, Marco Rubio through an aide has denigrated many average Americans who are facing bleak employment prospects.  The inflammatory statement was first released by The New Yorker:

“There are American workers who, for lack of a better term, can’t cut it,” a Rubio aide told me. “There shouldn’t be a presumption that every American worker is a star performer. There are people who just can’t get it, can’t do it, don’t want to do it. And so you can’t obviously discuss that publicly.”

The solution apparently in Rubio's mind?  Kick them to the curb and treat these Americans like disposable garbage as the GOP seeks to treat so many others, especially the poor and less fortunate.  It goes without saying that Rubio and company are frantically claiming that the statements were "taken out of context" which seemingly means they were not stated in a closed, controlled setting with limited access for reports.  Here's a sampling of the supposedly misquoted comments: 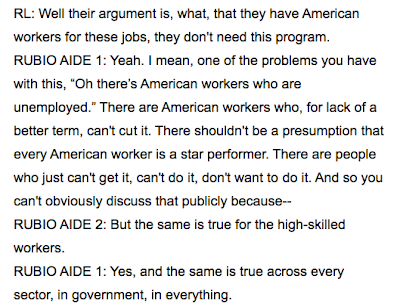 New York Magazine looks at this blunder by Rubio and the possible consequences for passage of meaningful immigration reform.  Here are excerpts:

Part of the fascination of the immigration-reform saga is that it provides a test of the Republican Party elite’s ability to tame its own base. For most of the Obama era, the bulging-eyed mania of the conservative activist base helpfully served the party’s interests.

Immigration reform is the clarifying event, directly pitting the passions of the base against the party elite’s long-term survival.


As a political matter, passing immigration reform is a necessary, though not a sufficient, condition for winning national elections. The Latino vote is not going to stop growing, and while Latino voters hold left-of-center views pretty much across the board, Republican hostility to illegal immigrants is the insuperable obstacle. Political scientist Dan Hopkins compared the GOP’s voting coalition in 2012 versus 2008 and found Latino Republicans defected at a higher rate than any other piece of the party’s voting bloc.


What makes immigration reform such a no-brainer for the elite is that Republican elites not only grasp its political necessity, but, for the most part, also support it on the merits. Immigration reform is helpful to business in any number of ways, one of them being as a legalized channel for low-wage labor.
[A]n aide to Marco Rubio strips bare the dynamic with a brutal frankness that I have never seen before in American politics   . . .   The idea that American workers don’t want to do certain jobs is a long cliché peddled by people who sit in soft chairs all day. American workers will do any job if it pays well enough — American workers toil in coal mines and collect garbage if they’re paid a living wage to do so. You certainly don’t have to take a cruel and ignorant view of the labor market to support immigration reform . . .

The Rubio aide quote is not only a piece of shocking candor, but also the biggest single blunder the pro-reform coalition has committed so far. Party elites may nod along when they read it, but there’s a reason nobody in politics ever says anything like this.

The question, as always, is, What will John Boehner do? The endgame of a successful law almost has to include the House passing a bill with mostly Democratic support. Boehner probably wants to pass a reform, and possibly a majority of House Republicans do, too, but there’s no chance a majority of them wants to vote for it openly.  . . . . No way in hell" is how several described the chances of the speaker acting on such a proposal without a majority of his majority behind him.

What I find most shocking about today's GOP - and the Christofascist puppet masters behind the scenes - is that they are utterly incapable of seeing the common humanity in others.  They whine about "Christian values"yet they display nothing but contempt and hatred towards those who are different, be they different because of the color of their skin, their national origin, their sexual orientation and a host of other criteria to fan division and discord.