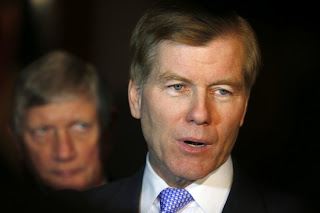 Ken Cuccinelli isn't the only corrupt GOP politician in Virginia.  As the Washington Post reports, a federal investigation into gifts to Bob "Taliban Bob" McDonnell and his family reveals that the McDonnells were lined up like pigs at a trough scarfing up tens of thousands of dollars worth of gifts that were conveniently not disclosed as required by Virginia law.  Combined with Cuccinelli's office assisting a big campaign donor in private, civil litigation, the picture is one of widespread corruption at the highest levels of Virginia government.  Here are highlights from the Post story:

Federal authorities are asking Virginia Gov. Robert F. McDonnell’s associates about previously undisclosed gifts given by a campaign donor to McDonnell’s wife that total tens of thousands of dollars and include money and expensive designer clothing, according to people familiar with the inquiry.

The questions are part of broad federal and state investigations into gifts to the governor and his family and whether McDonnell (R) took official action on behalf of anyone who gave gifts, people with knowledge of the investigation have said.

But the people with knowledge of the inquiry, who spoke on the condition of anonymity because of the sensitive nature of the investigation, say the scope is wider than just the wedding gift. The value and nature of additional gifts from Williams, including money provided in several checks, suggest that authorities are exploring a more extensive relationship between Williams and the McDonnells than previously revealed.

Additionally, famed Virginia socialite Patricia Kluge, who was one of the state’s wealthiest women before a dramatic and public crash during the recession, has been subpoenaed to appear before a grand jury to answer questions related to the McDonnells, according to people who are familiar with her summons.  It is not clear what testimony authorities will seek from Kluge, who owned a winery and vast estate near Charlottesville before losing both in the economic downturn.

As public scrutiny of his relationship with Williams has mounted, McDonnell has declined to provide a full accounting of other gifts Williams provided to members of the McDonnell family.
A local prosecutor in Richmond is conducting a parallel investigation to the federal probe to determine whether McDonnell complied with state law in his annual financial filings.

That investigation could explore whether the governor received enough benefit from gifts given to his wife — particularly loans or gifts of money — that he should have considered them gifts to himself as well.

Federal authorities are exploring whether McDonnell performed official acts to boost the company in exchange for gifts from Williams, people familiar with the inquiry have said.


It would seem that McDonnell's aspirations for national office are going to be toast.