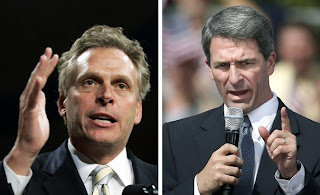 While I remain concerned about turnout for the 2013 Virgina elections this coming November - minorities, gays and women need to be made to understand that their votes in November, 2013 are as important, if not more important, than the votes they cast in November, 2012, - the GOP news is that saner Republicans appear to be jumping ship and endorsing Terry McAuliffe for Governor of Virginia.  One can only hope that as Ken "Kookinelli" Cuccinelli's extremism is exposed and his conflicts of interest and ethically challenged behavior becomes more widely known, the exodus from the GOP will continue.  Here are highlights from the Fredericksburg Free Lance-Star on the latest GOP endorsements of McAuliffe:

Chichester and several other Republicans formally endorsed McAuliffe at a morning press conference in Richmond today.

They join other Republicans who are outspoken about their belief that Cuccinelli is too far to the right, and feel they’re becoming the GOP’s moderates as the party becomes more conservative.
“I’m looking forward to the time our party nominates someone I can support that is in mainstream Republican thinking,” Chichester said.

He was joined at the press conference by Republican former delegates Vince Callahan and Katherine Waddell, and by Judy Ford Wason, who backed Republican Gov. Bob McDonnell in 2009. Former Sen. Russ Potts and former Del. Jim Dillard are also part of the “Virginians for McAuliffe” group.

Chichester said he and McAuliffe had a “heart to heart” talk, and that McAuliffe “gets it.”

“It,” for Chichester, the former Senate Finance chairman, is an understanding that a governor has only four years to govern but those four years include two budget cycles with “horizons that go much beyond those four years.”