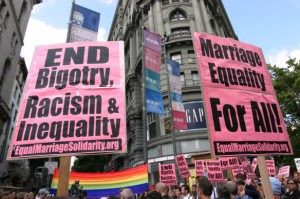 One of the most ludicrous and disingenuous talking points of the anti-gay marriage crowd (they are really anti-gay and not just anti-gay marriage) is that somehow gay marriage will harm heterosexual marriage and damage the "institution of marriage."  A new study confirms that such claims are - like just about everything else that comes out of the mouths of the Christofascists, Southern Baptist Convention and the Catholic hierarchy - lies.  Thus, the only real motivation for opposing gay marriage is to keep same sex couples inferior under the law so that the "godly Christians" can feel superior and point to anti-gay laws as a justification for their own hate and bigotry.  Here are highlights on the study findings via Think Progress:

States that have passed marriage equality legislation have seen no impact on their rates of opposite-sex marriage, according to a new study published Tuesday.

The study, authored by Alexis Dinno and Chelsea Whitney of Portland State University’s School of Community Health, was published in the online research journal PLOS ONE. Dinno and Whitney compared rates in the 13 states which had legalized marriage equality or strong civil unions before 2009 to those in other states, finding that opposite-sex marriage rates did not differ in those states to a statistically significant degree:

The idea of marriage equality as an “attack on traditional marriage” is a favored talking point of opponents. In April, former Republican presidential candidate Rick Santorum said legalizing same-sex marriage would discourage marriage among heterosexual couples because the traditional understanding of marriage as a means of reproduction would erode. The Family Research Council has argued that “traditional” marriage keeps men from cheating on their wives once the women are no longer fertile. Two anti-marriage equality advocates from the Heritage Foundation said it would lead to the erosion of marital norms, even though opposite-sex couples already cheat, divorce, and decline to have children (or are unable to), even in states that still restrict marriage.

While there is no harm to opposite-sex couples, studies have shown that ballot initiatives banning same-sex marriage are actually psychologically harmful to the gay community.

Yes, there is documented harm to same sex couples and that's the goal of opponents to gay marriage.  They actively seek to harm same sex couples and punish us for failing to adhere to their sick, ignorance, fear and hate based religious beliefs.   Yes, it's an ugly truth, but that is the face of conservative Christianity in 2013. And leading the charge are hate groups like FRC and NOM - and, of course Catholic bishops across the world.