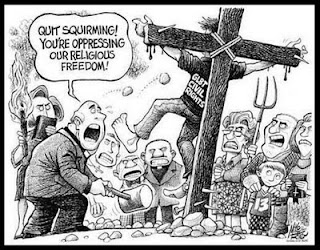 It yet another display that they believe themselves to be above the civil laws and that their rights should trump those of everyone else, some 200 Christofascists are vowing to defy the rulings of the U. S. Supreme Court should it hand down decisions supportive of gay marriage.  With the Christofascists, it is always first and last all about them and their demand that they have the unfettered right to mistreat and discriminate against others of differing beliefs, and all too often, different skin colors.  The Christofascists have truly made Christianity into something ugly and contrary to the principles of the Founding Fathers.  Think Progress looks at this mindset which is akin to that of the hardcore segregationists who sought to defy Supreme Court rulings in the 1950's and 1960's.  The list of those issuing the threat comprises a who's who of hate group leaders and far right Republicans.  Here are article excerpts:


Drawing what they called a line “we cannot and will not cross,” more than 200 conservative activists released a letter Thursday vowing to ignore any U.S. Supreme Court ruling in favor of marriage equality for same-sex couples. The signers include prominent anti-LGBT activists and major figures from the national conservative movement.

Circulated by Liberty Counsel Action chairman Mat Staver and Common Good Alliance chairman Deacon Keith Fournier, under the banner of the equally ironically named Freedom Federation, the statement bore the title, “We Stand in Solidarity to Defend Marriage and the Family and Society Founded Upon Them.” After arguing that same-sex marriage goes against “natural moral law,” the signers claim that the Supreme Court has “no authority to redefine marriage,” writing:

As the Supreme Court acknowledged in the 1992 decision of Planned Parenthood v. Casey, its power rests solely upon the legitimacy of its decisions in the eyes of the people. If the Supreme Court were to issue a decision that redefined marriage or provided a precedent on which to build an argument to redefine marriage, the Supreme Court will thereby undermine its legitimacy. The Court will significantly decrease its credibility and impair the role it has assumed for itself as a moral authority. It will be acting beyond its proper constitutional role and contrary to the Natural Moral Law which transcends religions, culture, and time.


Worse, the letter ends with a clear threat that conservatives will refuse to comply with any court ruling in support of marriage equality: “[M]ake no mistake about our resolve. While there are many things we can endure, redefining marriage is so fundamental to the natural order and the true common good that this is the line we must draw and one we cannot and will not cross.”

Given that no one has ever suggested that religious entities be expected to involuntarily perform same-sex marriages, or inter-racial marriages, or marriages involving divorced people, or people who are not Mormon, etc., it's hard to see how this threat would have practical meaning. (Recognizing that some businesses have tried to ignore civil rights laws.)