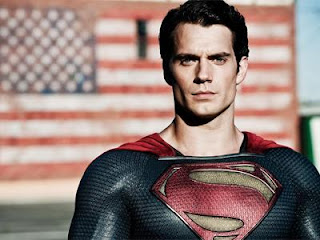 The boyfriend and I and two friends went and saw the new "Man of Steel" at the Hampton Air & Space Museum's huge IMAX theater.   I don't thank a gay man or straight woman in the audience did not feel their heart rate pick up a bit every time the camera caressed Henry Cavill's gorgeous face and body (I bet there are women who are cursing themselves for bullying Cavill in what he calls his "fatty" days as a youth).  But beyond the movie's stunning male beauty contribution, we all enjoyed the story line which departed in many respects from past Superman movies.  Some of the battle scenes between Superman and General Zod and his henchmen could have been shortened, but overall, the movie is well worth the cost of admission.  The special effects were quite spectacular.

One theme that I picked up on during the movie before Clark Kent decides to embrace who he is and his state of being "other" compared to those around him is the struggle involved in hiding who one is day after day, year after year.  It's a struggle than many of us in the LGBT community experienced before we found the courage to accept who we were born to be.  A column in The Advocate looks at this thread of the movie plot.  Here are excerpts:

Frightened, he runs out of the classroom, down the hall, and locks himself in a broom closet. Through the locked door, he hears his classmates whispering, calling him “weird,” and “freak,” even as he clasps his hands tightly over his ears.

This scene from director Zack Snyder’s Man of Steel is one of many that will resonate with LGBT viewers, and highlights why the latest Superman reboot may have more LGBT appeal than any other iteration of the story based on Kal-El, the Last Son of Krypton.

Of course, it doesn’t take x-ray vision to see why many LGBT people are drawn to the colorful world of comic book superheroes. From characters who struggle with secret identities to mutants who are despised by society because they are born different, the genre is practically overflowing with queer metaphors. But Man of Steel integrates several of these into Superman’s mythology in novel ways.

Beyond the symbolism of a young Clark Kent locking himself in a closet as he struggles with parts of himself he doesn’t yet understand but knows he must hide, the new film reimagines the origins of Superman at a fundamental level. In this version of the story, children are not born on Krypton, they are engineered to perform specific roles within Kryptonian society. Kal-El is considered an abomination because he is naturally conceived by his parents Jor-El and Lara — an act that is illegal on their planet.

With homosexual acts still illegal in many nations around the world, this particular twist to the Superman mythos adds an even deeper dimensionality to a queer reading of Man of Steel. His status as an outsider who is born different positions Superman’s story as an LGBT allegory in the same realm as Marvel’s X-Men.

“You have to keep this side of yourself a secret,” Jonathan Kent (Kevin Costner) tells his adopted son after Clark uses his abilities in front of his classmates. It’s a comment that is all too familiar for many LGBT viewers from well-meaning but misguided parents who fear for their “different” child’s safety and happiness. But it’s the following scene, a sort of coming out, that hits a familiar emotional note.

More than any Superman film before, Man of Steel presents Kent as an outsider, struggling to find his place in a society where he does not see himself reflected. It’s a predicament not unfamiliar to many in the LGBT community — especially those who grew up in an era before gay characters were commonplace in media, when others like us could be discovered faster than a speeding bullet through the internet.

But while the struggles of this Superman make him more relatable than ever to LGBT fans, his journey throughout the film is also an inspirational one, as Clark reaches his full potential only when he embraces his differences and comes out of the closet as a Kryptonian.

As I said, I really enjoyed the movie and highly recommend it to those who have not yet seen it.

Email ThisBlogThis!Share to TwitterShare to FacebookShare to Pinterest
Labels: coming out, different, in the closet, Krypton, Man of Steel, other, Superman