Rachel Maddow: The GOP’s ‘Awkward’ Positions On "The Gay" WillSoon Come Crashing Down 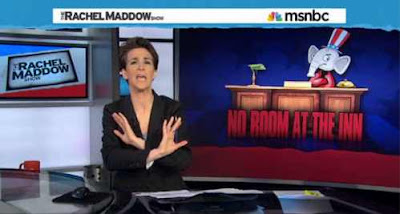 As noted many times on this blog, some 20 to 25 years ago the Republican establishment decided that mobilizing the Christofascists would help the GOP win elections.  At the time, the powers that be in the GOP never stopped to ask the question of how, once these people have been allowed into the party grass roots, would the so-called establishment (i) control them and/or (ii) eject them from the party apparatus if their batshit craziness became a problem.    Now, the day of retribution is about to arrive and the GOP establishment seemingly has no plan on how to eject the most ignorant, nasty and hate-filled elements of today's GOO, the "godly Christian" crowd.  Rachel Maddow recently looked at the coming Armageddon for the GOP in terms of its virulently anti-gay platforms passed, of course, by the ugliest hate group elements of the GOP base.  Here are highlights from The New Civil Rights Movement:

Rachel Maddow last night explored the “awkward” stance almost every Republican politician has taken on LGBT civil rights, which, she says, has “bewildered” the rest of America. Starting with Texas governor Rick Perry winning the war on the war on Christmas by signing a bill making it “not illegal” to say “Merry Christmas” in schools (a bill, by the way, that is likely unconstitutional — see our discussion here) to Ralph Reed‘s Faith & Freedom Coalition‘s “Road to Majority” conference this weekend, which, Maddow noted, mockingly, lobbied Congress this week “on the evils of gay marriage and the darkness that will be unleashed on the land if the court rules in a pro-gay way.”

But Republicans can no longer feel safe talking about gay people the way they have in the past, says Maddow.  “Republican politicians are about to lose the luxury of only talking about gay rights in front of anti-gay audiences like the Faith & Freedom Coalition, or avoiding the question altogether because they don’t want to be quoted about it because their Republican position on the subject is so unpopular,” the MSNBC anchor reveals.

“Because in Republican world — it is a very different world than most of us live in when it comes to talking about ‘The Gay,’” Maddow rightly notes.  Nobody who has any real prospects of being a national leader in Republican politics in the next few years has anything other than a 100 percent anti-gay policy position on something like non-discrimination,” Maddow added. “That is apparently still a requirement if you are a Republican and you want to hold higher national office.”.

But all that is about to change, and the ability to be anti-gay and continue to hold elected office will “come crashing down on the Republican Party,” Maddow predicts, when the Supreme Courts hands down its rulings on two historic marriage cases, Prop 8 and DOMA,  .  .  .  .  .

“After these rulings come out, this is going to be the biggest news in the country,” Maddow concluded. “They’re going to have to talk to the rest of the country, too, increasingly not only against them on these issues but bewildered by them and their positions on these issues.”

Like, Ken Blackwell who happens to be African-American and whose troubled past didn’t preclude him from being paid big bucks by the hate group Family Research Council, telling a Congressman if the Supreme Court rules in favor of the LGBT community there will be mass civil rights disobedience protests “reminiscent of the Civil Rights Movement,” nationwide.

One of the biggest problems for the GOP in my view as a former GOP activist is that the Party increasingly operates and exists in a bubble.  GOP members listen to Fox News and ignore real world news: they listen to the lies and false propaganda of anti-hate group; and they refuse to get out and converse with normal sentient individuals outside the Tea Party, Republican Women's Clubs and spittle flecked Christofascist circles.   The world and the nation's demographics are changing even if many in the GOP cling to the fantasy that we are still in the 1950's or early 1960's where the Clever family (Leave It to Beaver) and Anderson family (Father Knows Best) were supposedly the norm.

I hope the Supreme Court Rulings whatever they may be turn out to be unsettling, cataclysmic events for both the GOP and the Christofascists.