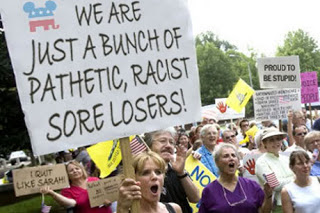 Admittedly, I write a lot about the Republican Party and its current frightening state - which in my view tracks directly back to the rise of the paranoid, ignorance embracing - clinically insane? - Christofascists in the party.  Part of me continues to hope that the GOP can regain sanity and eject the most ignorant and hate filled elements of the "godly Christian" crowd from the party.  How that can be accomplished is what remains troublesome.  The equivalent of napalm is needed, but one doesn't want to kill every element of the GOP, just the insane Christofascist and Tea Party elements that have ushered in individuals like Congressman Burgess, Sarah Palin and similar loons.  A piece in The Daily Beast looks at how the debate over immigration reform is pitting the forces of reaction and bigotry (the Dark Side, if you will) against those who understand that change must occur.  Here are some article excerpts:

We are about to watch something unfold that is really fascinating and very rare in American politics. One of our two major parties—I’ll let you guess which one!—is on the cusp of having to weigh what is good for its congressional wing in the short term versus what is good for its aspirations to reclaim the presidency over the long term. I’m not sure this has any precedent, at least in the modern history of the republic: a party that, electorally, demographically, and culturally, has so insulated and isolated itself from the rest of the nation that what’s good for its legislators is bad for the party’s future—not to mention the rest of the country.

I’m writing of course about immigration and, of course, about the Republican Party. We are nearing, now, the push-comes-to-shove moment; we’re about to see whether this bill can pass.

In the Senate, Republicans are skittish about border security (among other issues, but mainly border security). The Republicans who want stricter border-security measures and a say in how to create them have a point  .   .   .   .  it’s not really about border security—border security is the only leverage Republicans have to slow down the path to citizenship, which ultimately is the issue here for the right-wing base and always has been. The vast majority of individual GOP House members, and a smaller majority of the party’s senators, know that voting for immigration reform with said path is risky for them politically. At the very least, it’s something they’ll have to explain at angry town hall meetings. In the more serious cases, it will invite a primary challenge from the right.

And thus we have it: something that would obviously be good for their party in the long run, supporting reform so that they can start the process of appealing to Latino voters, is dangerous for it in the short run.

This is not some freak accident, but is the product of design—of the kinds of ideologically homogenous districts Republicans have drawn for themselves, and more broadly, the way a snow-white party has culturally divorced itself from the racially heterogeneous America the rest of live in and celebrate.

[N]o congressional party has ever operated out of a little ideological cocoon the way this one does. A president has to appeal to voters in the middle, but these people only have to appeal to voters who are exactly where they are and even further to their right. And they can win reelection pretty much forever on that basis.

If he [Boehner] doesn’t [allow a vote on immigration reform], his party will find itself in a raging battle with demographic destiny. And its only future path to the White House will lie in stoking white resentment to fever levels to produce the highest turnout possible, while dividing the country even further—but solidifying the cultural idea of “the party,” which is what really matters most to them.

The so-called GOP establishment created this Frankenstein monster it now faces.  I feel no sympathy whatsoever for these folks.  Some of us warned of the coming danger and were denigrated and mistreated.  Pandering to ignorance and bigotry is never a good long term solution.  Now the GOP is reaping what it sowed.