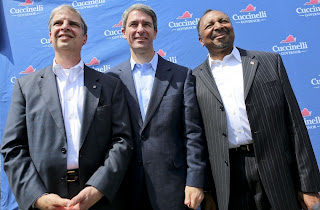 The need to reform the GOP isn't just a national level problem.  Here in Virginia the 2013 GOP slate of statewide candidates is the most extreme and in my view mentally disturbed in the history of the Commonwealth.  And who put these loons and extremists on the ballot?  The Christofascists led by The Family Foundation, of course.  The challenge for the Democrats will be to educate voters as to just how insane the GOP candidates are in fact.  Most people likely cannot believe that the GOP has sunk so low into extremism that people this extreme could actually be major party nominees.  A piece in Bloomberg.com looks at the growing divergence between younger and educated voters and the spittle flecked religious extremists who now control the Republican Party of Virginia.  Here are some article excerpts:

Loudoun County the wealthiest in the U.S. Technology companies, many with ties to the federal government, and other businesses fueled by the development have stoked an economy attracting higher educated workers and minority populations that have soared since 1990 -- a five-fold increase of Hispanics and seven times the number of Asians.

Located 40 miles from Washington, D.C, Loudoun County is now considered by White House officials to be one of the best bellwethers for presidential elections. President Barack Obama won there in 2008, the first Democrat to do so since Lyndon Johnson in 1964, and again in 2012, victories that signaled how shifting economic and population trends are refashioning the politics of Virginia and the nation.

“We are seeing a solidly red state turn blue,” said Dustin Cable, a demographer at the University of Virginia’s Weldon Cooper Center for Public Service in Charlottesville. “Virginia is really ground zero for a lot of what we see at the national level.”

[T]he Old Dominion is also seeing a rise in Asian voters and in the number of residents with masters or doctorate degrees.  .  .   .  Democrats have won because of the combination of the demographic changes and the policy positions taken by Republicans on issues such as immigration and abortion rights.

“It’s not just the change in demographics, it is the changing issue matrix the party has decided to embrace,” said Tom Davis, a former Republican congressman who represented counties in northern Virginia. “The social and cultural agenda of the party does not play to these educated people.”

“One of the challenges the Republican Party faces in Virginia and a lot of other swing states is how do we remain a conservative party but still be able to appeal to these changing demographic patterns,” [Bill] Bolling said.

Bolling said his colleagues have done a poor job appealing to these emerging voters, and instead have retreated into a party where “you are persona non grata unless you agree with them 100 percent of the way, 100 percent of the time. We’ve got to move beyond that.”

We need a landslide win for McAuliffe and the Democrat ticket.  Nothing less may force moderates to try to retake the party from the Christofascists.  The key is educating blacks, women, gays and other minorities as to just how extreme the GOP ticket is and how much they will work to disenfranchise minority voters, totally control women's bodies and make being gay a living Hell in Virginia.  These GOP candidates are not nice individuals and neither are those who nominated them.