Is Pope Francis Waving a White Flag on Gay Marriage? 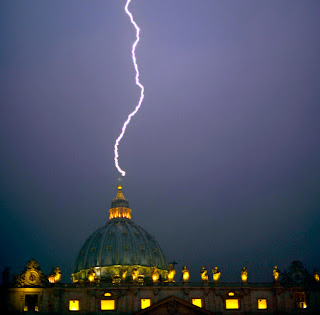 The Roman Catholic Church does not have a good track record on accepting new scientific knowledge or dealing well with objective reality.  Over the course of history, the Church has been wrong more often than it has been right.   The Vatican anti-gay jihad is but the latest of many Church efforts to hang on to ignorance and bigotry even as the world at large moves onward.  In a column in Huffington Post Michelangelo Signorile speculates that Pope Francis may be moving towards accepting reality on gay marriage: it is a battle the Church is going to lose and that cutting losses may be the better course of action.  That's not to say Francis will not face major blow back from hysterical bigots like William Donohue of the so-called Catholic League or the self-enriching hate merchants at the National Organization for marriage.  Here are column excerpts:


This week we saw reports about Pope Francis cryptically acknowledging the existence of a "gay lobby" in the Vatican, about which he supposedly believes something has to be done. But if I were on a crusade against gay marriage, like Maggie Gallagher or Brian Brown of the National Organization for Marriage (both devout Catholics), I don't think I'd be very happy with this pope so far. In fact, I'd say he stinks.

And Pope Francis had nothing publicly to say about any of it. Zero. Zilch. Nada. He was busy washing the feet of the poor and tweeting about how selflessness is a virtue. Go figure.

Back when Spain passed marriage equality in 2005, Pope Benedict whirled himself into a frenzy, railing against it regularly. He told Catholic officials there that any support of the law would cost them their jobs and told secular public servants who are Catholic to flout the law and refuse to marry gays.


Francis just doesn't seem as if he wants to be out front on this issue. That was even clearer when Francis met this morning with the Archbishop of Canterbury, Justin Welby, who'd railed against gay marriage in the United Kingdom, which is about to pass marriage equality. According to the Associated Press:


In his remarks to Welby, Francis said he hoped they could collaborate in promoting the sacredness of life "and the stability of families founded on marriage." ...

Significantly, though, Francis didn't specify that marriage should be based on a union between a man and woman, which is how Benedict XVI and John Paul II routinely defined it in a way that made clear their opposition to same-sex marriage.

Vatican officials said Francis' phrasing was a diplomatic attempt to make his point without making a provocative pronouncement....

I'm not saying Francis is anywhere near there (though he did reportedly support civil unions, as I noted in a post a couple of months back). But having harshly railed against gay marriage back when he was in Argentina, only to lose that battle, he may be seeing that the handwriting is on the wall and that he's got better things to do with his time. And that can only be seen as a loss for Maggie Gallagher and other anti-equality advocates who hoped the pope would loudly lead their crusade.