Why Was Cuccinelli's Office Was Representing Energy Companies Against Virginia Citizens? 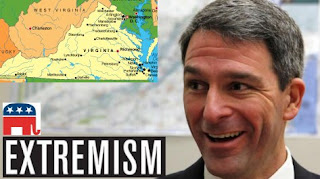 It seems that more and more questions keep arising from the recently disclosed role that one of Ken Cuccinelli's staff attorneys in the Virginia Attorney General's Office was providing to energy companies being sued by southwestern Virginia landowners.   One thing that is clear, however, is that Cuccinelli has lied about his office's involvement.  Oh, and did I mention that one of the companies receiving unwarranted legal advice is the subsidiary of a corporation that gave $114,044.00 to Cuccinelli's gubernatorial campaign?  Cuccinelli is not only a right wing extremist, but he is also a liar and has no regard for ethics.  Money and power would seem to be his real gods despite his feigned religiosity which, in my view derives from him being a self-loathing closet case (I am still waiting for someone to provide sworn proof of the rumors I continue to hear).  The Washington Post provides more details on this very questionable involvement of the Attorney General's office and Cuccinelli's lying about it.  Here are excerpts:


THE CONDUCT of the Virginia attorney general’s office under Ken Cuccinelli (R) has raised eyebrows almost from the start of his tenure. There was the troubling investigation of a global warming researcher, the ideological attacks on abortion and gay rights, the belated recusal from a case in which Mr. Cuccinelli may have had a conflict of interest. Add now to the list criticism from a federal judge about the dubious role of the attorney general’s office in advising energy companies being sued by southwestern Virginia landowners. A footnote is the revelation that the parent company of one firm is a major contributor to Mr. Cuccinelli’s campaign for governor.

U.S. Magistrate Judge Pamela Meade Sargent took aim at the relationship, revealed in a series of e-mails between an assistant attorney general who advises the Virginia Gas and Oil Board, Sharon Pigeon, and the two Pittsburgh-area companies, EQT Production Co. and CNX Gas Co., involved in a series of lawsuits over natural gas royalties. “Shockingly,” wrote the magistrate in a June 5 opinion recommending certification of the cases as a class-action suit, “these emails show that the Board, or at least Pigeon, has been actively involved in assisting EQT and CNX with the defense of these cases, including offering advice on and providing information for use on the Motions before the court.” At stake in the case, according to the Associated Press, are tens of millions of dollars that attorneys for the plaintiffs say are owed to thousands of landowners for extraction of methane gas from underground coal beds.

The state is not a defendant in the case and, according to a statement from the attorney general’s office, intervened for the limited purpose of defending the constitutionality of Virginia’s gas and oil law: “Our office’s role is not to provide advice to any private party in this case.” After the Bristol Herald Courier published the e-mails that seemingly showed legal advice being offered (one subject line read “Confidential Joint Defense Atty Work Product”), the attorney general’s statement was amended to acknowledge that the “emails may have come across as a bit overzealous.”


Don Barrett, lead attorney for the plaintiffs, told us that issues about the constitutionality of Virginia law were long ago settled and that another attorney representing the state, not Ms. Pigeon, was involved. He branded as “nonsense” any notion Ms. Pigeon cooperated with both sides, noting the e-mails were obtained by subpoena. “I’m not involved in Virginia politics, he said, “(it’s) not my business and I don’t know Mr. Cuccinelli or [Democratic candidate for governor Terry) McAuliffe . . . but we have been outraged that the state of Virginia chose to get in bed with companies trying to cheat these people.”

“Shockingly” was the word employed by the judge. But, given Mr. Cuccinelli’s track record in office, it was not entirely unexpected.

Cuccinelli is a dangerous menace and MUST be defeated in November.