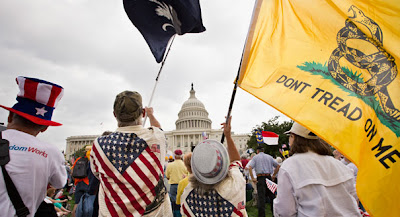 Activists are promising to spend the congressional recess reminding lawmakers who support the Gang of Eight legislation what the base is capable of. Think loud town halls, jammed phone lines and primary challenges down the road — echoes of Obamacare three years ago.

“The anger is more intense now than it was in 2010,” said Judson Phillips, founder of Tea Party Nation. “They are more upset about the amnesty bill than they were about Obamacare.”

[T]he majority of conservative groups are looking to replicate protests of previous years driven by Obamacare, the 2008 financial bailout, the stimulus bill, cap-and-trade bill and other Obama administration policies, which propelled the Republican House takeover in 2010. But after seeing President Barack Obama win re-election last year and GOP senators negotiate with Democrats, part of what’s driving the tea party is disappointment with the result of their electoral efforts and disenchantment with the Washington crowd.

“Some of these people have been up there so long and have been insulated and live in this bubble and aren’t connected to to the real world,” said Amy Kremer, chairwoman of Tea Party Express. “It’s this attitude of: They know better.”

Former Rep. Allen West, who has hinted he might challenge Sen. Marco Rubio in 2016, pointed to hidden details in the Gang of Eight bill that could cause the conservative base to lose trust in their lawmakers.


Kremer predicted that Republican lawmakers will avoid public appearances and other opportunities that might lead to an earful from an angered conservative base when they go back home this summer. Taped town halls became a hallmark of politics in previous summers, as lawmakers were filmed facing angry crowds or uncomfortable questions on both policy and topics like Obama’s birth certificate.


Cindy Lucas, a coordinator with the tea party-affiliated Martin County 9/12 Committee in Florida, said she spent this week trying to sway Rubio from supporting the bill. Next week she expects his phone lines to be “melted” by conservative complains and his offices in Florida barnstormed by agitated constituents, but she’s already moved to the next step.

The issue of immigration now heads over to the House, where many conservatives, facing pressure from their base, have made it clear that they oppose any bill with a pathway to citizenship even with beefed up border security measures.

House Republicans and activists are pressing Speaker John Boehner to invoke the Hastert rule on any immigration legislation, which means he won’t bring the bill to the floor unless it is supported by the majority of Republicans.

Rep. Steve King (R-Iowa), who organized a six-hour press conference in opposition to the Gang of Eight bill last week, told POLITICO that conservatives who support a pathway to citizenship lose the right to be called conservatives.

“There are few times that are true litmus tests for conservatives. This is one of those times,” Phillips said.   At the top of everyone’s lists are two primary targets for the 2014 election: Sens. Lamar Alexander (R-Tenn.) and Lindsey Graham (R-S.C.). Graham is a Gang of Eight member and Alexander is a sponsor of the border control surge. That list could also include Sens. Kelly Ayotte (R-N.H.), Mark Kirk (R-Ill.) and Rubio in 2016.

It will be interesting to watch the Tea Party destroy Republicans and work to nominate utter nutcases akin to Todd Akin and Richard Mourdock who lost handily to sane Democrats.