Some weekends the boyfriend and I get ourselves over scheduled socially.  This weekend is one such weekend and began with a small dinner for a friend's birthday Friday evening at the yacht club, I had the regatta much of the day yesterday and then we had dinner at historic Warner Hall plantation in near Gloucester, Virginia.  Today we are throwing a brunch for some of the boyfriend's clients who are more fun than the law should allow. 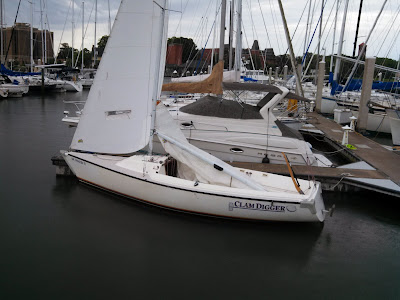 The regatta was great fun and my boat (image above) managed to place second in all three heats even though none of the three of us had ever raced before.  While you cannot fully see it from the photo, the boat has a rainbow flag like stripe along the waterline - I suspect I was assigned to it due to the sailing director's sense of humor (she has a gay cousin).  The image below is of the boat that was our nearest rival and with which we were in close quarters - as in a few feet away - as we fought to be first around a couple of the marker buoys.  After a cloudy start with some rain showers, the day turned hot, sunny and gorgeous. 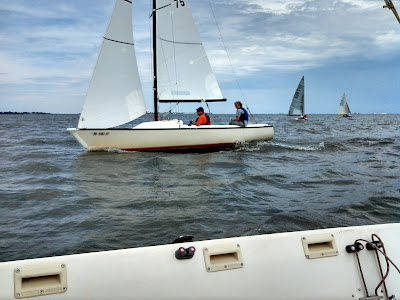 Once the regatta was over, I had to literally jump off the boat as it headed to dock and race home to shower and get ready for dinner at the Inn at Warner Hall near Gloucester, Virginia.  The property is amazing and dates back to 1642 and was owned by George Washington's great grand father.

Here's a bit of history from the Inn's website:

Ideally situated at the head of the Severn River in Gloucester County, the manor house at Warner Hall stands on a neck of land that has been occupied and built upon continually from the mid-17th century. Referred to as “Austin’s Desire” in the 1642-land patent, the original six hundred-acre plantation site was established by Augustine Warner as a “land grant” from the British Crown. Augustine Warner received the acreage in exchange for bringing twelve settlers across the Atlantic Ocean to the Jamestown Settlement, a colony desperately in need of manpower to survive in the New World.

The two families associated with the property from this early period until well into the 19th century, the Warners and the Lewises, were among the most prominent families in Colonial Virginia. Over the years, Warner Hall Plantation thrived, as did the descendants of Augustine Warner. Some of the most recognized names in American history are direct descendents of Augustine Warner – George Washington, the first president of the United States, Robert E. Lee, the most famous Civil War General and Captain Meriwether Lewis, renowned American explorer of the Lewis & Clark expedition. George Washington was a frequent visitor to his grandparent’s plantation.

Queen Elizabeth II, the current monarch of England, is a direct descendant of Augustine Warner through the Bowes-Lyon family and the Earl of Strathmore. In England, Warner Hall is referred to as “The home of the Queen’s American ancestors”.

Besides dinner on weekends, the plantation house is open as an inn 365 days a year.   The accommodations are elegant.  It's not inexpensive, but by many standards it is an amazing deal.

Virginia has amazing history and things to see.  Regrettably, the state remains anti-gay - the inn decidedly, is not - and LGBT travelers sadly have good reason to take their money and vacation elsewhere.

Shortly, I have to get going to help "Martha Stewart" prepare for the brunch.  The table is set: 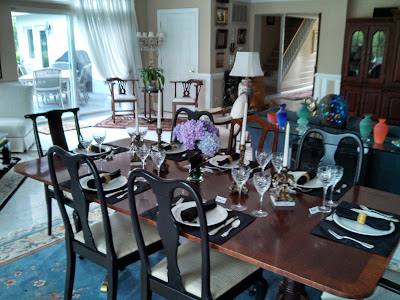