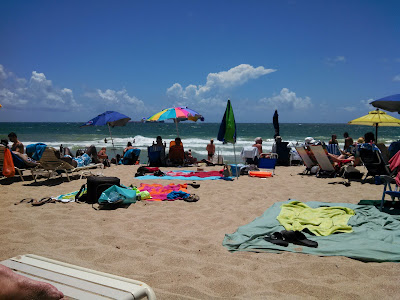 Our third day in the Ft. Lauderdale area was truly a busy one.  We spent a good part of the day enjoying near perfect weather at Sebastian Beach - the so-called gay beach - along with throngs of others.  Thanks to a steady wind, the temperatures were comfortable.   Besides the gather in of gays, what struck me as I walked along the water's edge was the racial and ethnic diversity of the crowd: black, white, Hispanic, and a mix of others with several languages being heard among the crowd.  It represents the future diversity of America even in states like Virginia.  It also represents what frightens the Hell out of Christian conservatives who see their strangle hold on society slowly and deservedly dying.

We had dinner at a French restaurant named Sage Cafe with our hosts and other friends visiting the area from Hampton Roads.  After dinner, we made our way over to Wilton Manors and did some clothes shopping since there are so many options for shopping for items one never sees in our backwater area.  We ended the evening by having a good time at The Alibi which was packed and playing great dance music. 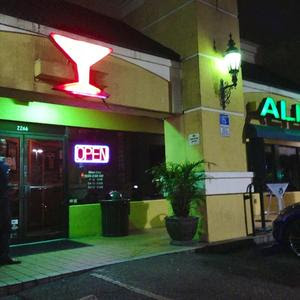