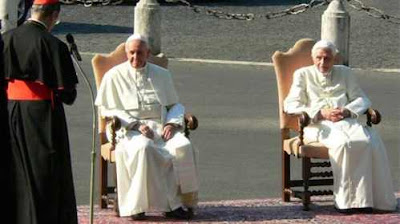 Some people - who might be described as either overly optimistic or delusional depending on one's perspective (I opt for delusional) - had hoped that Pope Francis would usher in a new era in the Roman Catholic Church's protracted anti-gay jihad.   Those misplaced hopes were dashed when Pope Francis released his first encyclical entitled “Lumen fidei” or “The Light of Faith” which makes it clear that the pathological anti-gay animus of John Paul II and Benedict XVI will continue.  Again I ask gay Catholics why the remain involved in a Church which seeks to dehumanize them and depict them as "inherently disordered" and "evil?" Masochism is about the only  The New Civil Rights Movement looks at this development.  Here are excerpts:

Benedict, as Pope, many times attacked same-sex marriage. Some thought Francis would focus more on less controversial issues and take the church back to its traditional home of caring for the poor, the sick, and the needy. Apparently, Francis has a different view than those who saw his elevation as a new time of unity for the Church.

What makes the encyclical all the more ridiculous is the fact that it argues that faith should be viewed as a "common good."  Apparently, Francis prefers to ignores the horrors done in the name of faith by his predecessors and the countless lives lost or destroyed thanks to people of faith.  Blind faith is a pernicious evil and provides the intellectually lazy and mentally disturbed with an all too easy justification for the harm they do to others.