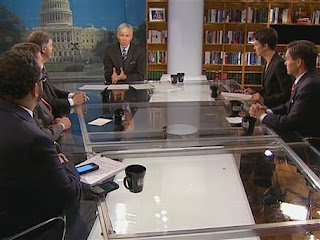 Watching Meet the Press this morning where a discussion of this week's SCOTUS rulings on gay marriage took place, there were times when I wanted to throw something at the television as Ralph Reed (who I met years ago at a political event and who candidly sent my Gaydar into overdrive), Jim DeMint and other Christofascist puppets spouted the usually anti-gay lies and untruths.  They likewise made it clear that they believe that minorities should have no rights unless and until the majority deems to allow them to have them.


The irony, of course, is filled with examples of where the majority was wrong, especially morally, in the way that minorities have been persecuted and deprived of rights: slavery, segregation, the treatment of women as chattel, hatred towards Jews,, etc.  The list is too long to enumerate, although I will point out two things.  First, in 1938, despite knowledge that atrocities against and the persecution of Jews was occurring in Germany, a Fortune poll found that two-thirds of the American public favored barring Jewish refugees from coming to America.  And when the U.S. Supreme Court handed down its ruling in Loving v. Virgina, interracial marriage had a lower approval level with the American public than gay marriage enjoys today.  Rather than being right, the majority is all too often wrong.  Dead wrong in the case of opposing entrance of Jewish refugees in the 1930;s.


The other thing that became abundantly clear from the interviews is that religious based animus towards gays and our families is the primary motivation of the "godly Christian" crowd.  Ralph Reed tried to float the canard that gay couples make inferior parents and without naming it by name relied on the fraudulent Christian Right funded Regnerus "study."  When confronted by David Gregory with he fact that the study only had relevance on broken homes, Reed refused to answer.  The same thing happened when Rachel Madow asked Jim DeMint to explain how same sex marriage harmed heterosexual marriage.  He could not give one concrete response and only reverted back to the usual blather about children needing a mother and father.


The sad reality is that these "godly folks" truly care nothing about the lives they damage or ruin.  When it comes to divorce, no one has a higher divorce rate than Evangelical Christians in the Bible Belt.   And banning gay marriage does nothing to (i) reduce the heterosexual divorce rate, or (ii) make gay and lesbian headed families miraculously disappear.  All it does is harm our children and deprive us of rights and benefits so that assholes like DeMint and Reed can feel superior.  It's sickening and it is diametrically opposed to the Gospel message.