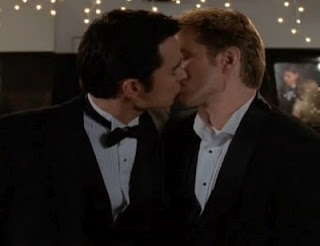 Last week's gay marriage rulings will be placing more and more pressure on Virginia to move into the 21st century, especially with Maryland and the District of Columbia both having marriage equality just across the Potomac River.  The Christofascists led by The Family Foundation - which deserves a hate group designation by the Southern Poverty Law Center - and their  puppets in the Virginia Republican Party will resist, but the tide is inevitable, and some are calling on Virginia to change rather than ultimate face the ignominy of another ruling like that in Loving v. Virginia.  The Staunton News Leader is leading the call:

Last week’s gay rights victories in the Supreme Court leave Virginia with this question: Will ours be one of the last states to allow same-sex marriage?

It took another Supreme Court case – Loving v. Virginia in 1967 – to make interracial marriage legal across the country. We hope the Commonwealth is not such a high-profile holdout on this century’s marriage issue.

Gay marriage will eventually become the law of the entire land. Even social conservative Gov. Bob McDonnell recognized this . . . .

Surely many Virginians agree with our local congressman, Rep. Bob Goodlatte, in thinking that “preserving the institution of traditional marriage is crucial to the stability of our society and serves the best interest of American families.”

However, more and more of us cringe at statements like Goodlatte’s. A tradition that denies loving, committed, adult couples the privileges of marriage is a tradition our society has outgrown, much as we have segregation, forced though we were, again by the Supreme Court. Any implication that families created from gay marriages undermine “the stability of our society” is either ignorant or pandering to a segment of the population that claims to be conservative but, when it comes to social issues, is really about control over other people’s lives.

The term “family values” has been co-opted by social conservatives who want all families to look a certain way. Virginia is growing beyond this. We value all families. May our constitution soon reflect this progress.

Head hate merchant at The Family Foundation, Victoria Cobb, is likely acting like someone peed in her Cheerios if she's read this editorial.
Posted by Michael-in-Norfolk at Sunday, June 30, 2013