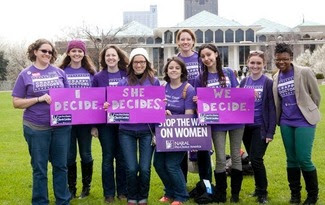 Republicans had not controlled the North Carolina legislature for 100+ years until recently.  Now, with the GOP in control, the flood gates for far right and Christofascist (a/k/a Christian Taliban) extremism and batshitery of all kinds have been opened.  Abortion, gay marriage and Sharia law are but a few of the North Carolina GOP's obsessions.  One can only wonder what is going to happen to the state's former pro-business atmosphere now that the culture wars seem to trump all else.  As Think Progress reports, an insane anti-Sharia law bill is being used to assault abortion rights as well.  Here are some story excerpts:

The North Carolina legislature is advancing a package of stringent abortion restrictions that appeared in the Senate this week without any public notice. The anti-abortion measures popped up on Tuesday night, tacked onto a controversial measure to ban Sharia law, and caught women’s health advocates completely off-guard.

House Bill 695, which would prohibit the recognition of Sharia law in family courts — an increasingly popular conservative tactic that essentially serves to demonize the Islamic faith — was slated for consideration in a Senate committee on Tuesday. As soon as that committee convened, it quickly approved several abortion-related amendments to the legislation. HB 695 now combines several different anti-abortion measures that were in different stages in the legislature into one omnibus measure.

The new amendments would prevent insurance plans on Obamacare’s health marketplaces from covering abortion services, ban “sex-selective” abortions, impose unnecessary restrictions on doctors administering the abortion pill to women, and require the state’s abortion clinics to adhere to complicated new regulations that would likely force most of them to close.

As the News Observer reports, several supporters of the bill — like lobbyists and representatives from the N.C. Values Coalition, the N.C. Family Policy Council, and N.C. Right to Life — were present during the committee meeting when the new amendments were proposed. But the pro-choice lobbyists in opposition to the measure “were not told it was being debated.” A few hours after the committee agreed to tack on the amendments, Senate Republicans decided to bring HB 695 to a floor vote.

Women’s health advocates, who had no idea these measure would be taken up on Tuesday, denounced the last-minute legislative move. They pointed out that state lawmakers are attempting to avoid massive outcry by quietly sneaking through unpopular abortion restrictions right before a holiday weekend.

Now that the abortion amendments are folded into an entirely unrelated measure on Islamic law, some Republican lawmakers are already claiming that “a vote against the abortion restriction bill is vote for Sharia law.”

Even if North Carolina Republicans may have hoped to avoid mass protests against HB 695, activists in the state are already loudly voicing their disapproval with the GOP-controlled legislature. Over the past several weeks, thousands of people have been participating in a series of “Moral Monday” protests to stand up against ongoing conservative attacks on the poor, minorities, women, and the environment.

Attacks on the poor, minorities, women, and the environment.  That is today's GOP agenda.   And what makes it all so dripping with hypocrisy is that these "godly folk" wrap themselves in Christianity even as they betray virtually every aspect of Christ's Gospel message.