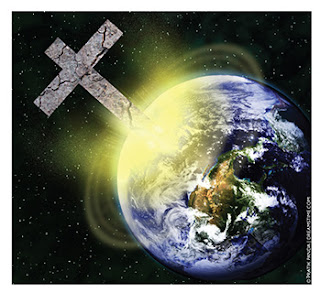 Inasmuch as the Republican Party is now a defacto arm of the most extreme far right Christian elements in America, the Christofascists refusal to take climate change as a real and growing problem is translating itself into a growing threat to the nation's future.   If people want to embrace ignorance and harbor racist and bigoted views within their houses of worship, it's one thing.  When it cripples governmental policy and threatens the rights and property of others, it is something far different.  A column in The Humanist looks at the far right's increasing insanity on climate change and how it is harming the rest of us.  Here are some highlights:

According to a Newsweek poll, 40 percent of people in the United States believe the world will end with a battle between Jesus Christ and the Antichrist. And overwhelmingly, those people also believe that natural disasters and violence are signs of the approach of the glorious battle—so much so that 22 percent of Americans believe the world will end in their lifetime. This would logically mean that concern for the world of their great-great-grandchildren makes no sense at all and should be dismissed from their minds. In fact, a recent study found that belief in the “second coming” reduces support for strong governmental action on climate change by 20 percent.

Apart from the corruption of money, whenever you have 40 percent of Americans believing something stupid—combined with the forces of gerrymandering in the House, disproportionate representation of small states in the Senate, the Senate filibuster, the winner-take-all two-party system that shuts many voices out of the media, out of debates, and off of ballots, and a communications system that mainstreams Republican beliefs—it’s almost guaranteed that the 40-percent view will control the government.

Congressman John Shimkus (R-IL) says the planet is in fine shape and guaranteed to stay that way because God promised Noah as much. 22 percent of Americans believe the world will end in their lifetime.

This would logically mean that concern for the world of their great-great-grandchildren makes no sense at all and should be dismissed from their minds. In fact, a recent study found that belief in the “second coming” reduces support for strong governmental action on climate change by 20 percent.

And where does that belief show up to damaging effect? In our politics it shows up primarily as an attitude toward presidents. While President Obama has spent five years actively promoting fossil fuels over renewable energy and doing very little to preserve our natural environment for future generations, the largest block of those concerned about global warming have spent their time telling each other to trust in God, that he works in mysterious ways, that he is up against the “evil one” and must be allowed time to succeed in his battle. You see, the problem with theism is not that some of its spin-off beliefs succeed in an undemocratic system. The problem is that theism is anti-democratic at its core.

I’m proposing the unpopular position of taking the facts as they come, acting accordingly, and acting cautiously when it comes to the fate of generations as yet unborn—even if that caution requires huge sacrifices.

There are other powerful forces weighing against action. There’s our love of technology, . . . . There’s also greed, including our fear that living sustainably would involve living with less of the materialistic non-essentials that currently clutter our lives and fuel our obesity. And there’s the myth that we’re powerless to effect change. Impotence is a self-fulfilling loop.

Those longing for the end of the world are far from alone in imagining that we don’t have the power to make the world over ourselves. Nonetheless, among the things we should be doing right now is explaining to our neighbors that Jesus isn’t coming back.


It would be nice - and divine justice, if you will, if we could put all the climate change deniers in thee lowest lying Louisiana parishes and leave them to experience first hand what their ignorance and close mindedness is causing to happen.