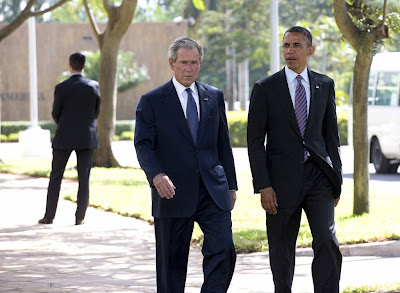 As regular readers know, I have nothing but contempt for George W. Bush, a/k/a the Chimperator.  Yet to many delusional Republicans the man is held in some level of respect.  Thus, it will be entertaining to watch the reactions of the racist Neanderthals of the GOP base.  The Dallas Morning News reports that Bush will speak on Wednesday lauding the benefits of immigration reform and providing a path to citizenship.  Here are story highlights:

A president named Obama may be most linked to overhauling immigration policy. But on Wednesday, George W. Bush will weigh in.

Bush will deliver opening remarks at an citizenship ceremony and immigration forum at the Dallas presidential center bearing his name, where it’s expected he will talk about how immigration reform will be good for America. A panel discussion titled “What Immigrants Contribute” will follow. The day will start with 20 immigrants taking a quick pathway to citizenship at an actual naturalization ceremony.

It’s unclear whether the ex-president will stick to generalities during his remarks at the citizenship ceremony, or elevate the conversation with details about the super-sized immigration bill now being debated in Congress.

The George. W. Bush Institute has thrown some weight behind measures to overhaul immigration policies and linked it to its “4% Growth Project,” which proposes such growth would create 10 million additional jobs during the next decade with no rise in government spending. The event will include panels discussing immigration and economic growth, why naturalization matters and “how immigrants serve America.”