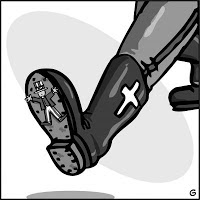 Despite the much repeated lie of the Christofascists that America was founded as a "Christian nation" all the facts point to the opposite conclusion.  Virtually all of the leading founding fathers were skeptics of organized religion and might be best described as Deists.  Moreover, they all respected education, science and knowledge and recognized that the world was not static and unchanging and that America would need to change with the times.  It's a mindset and view that is diametrically opposed to the agenda of today's Christofascists who embrace ignorance, reject science and seek to trample on the religious freedoms of others in order to impose their own fear and hate based vision of society on all.  What is even more disturbing is the fact that these ignorance worshiping, anti-democracy elements now control the Republican Party.   In an interview with The National Review, the always bovine and anti-liberty for all (and self-enriching) Maggie Gallagher exposes this mindset in a rant in the wake of the U. S. Supreme Court's gay marriage rulings.  She accuses Justice Kennedy of issuing a fatwa against Christians, yet is Gallagher and her allies that have issued a fatwa against anyone and everyone who refuses to knuckle under to them.  The woman, in my view, is mentally ill.  Here are interview highlights:

MAGGIE GALLAGHER: What you are really asking is: Will we concede the legitimacy of Kennedy’s fatwa against us, or will we respond with a sustained opposition — legal, political, cultural, and of the moral imagination?

I don’t believe in inevitability, I believe in human freedom and our power to shape the future. So it depends on us. But certainly I believe, as I wrote in the Los Angeles Times, that the questions raised by marriage — deeply rooted in our conception of who we are as men and women, the meaning of sexuality and gender — cannot be put to rest by the power of five lawyers on however high a court.

The cultural struggle I predicted in “Banned in Boston” is clearly playing out. Will they succeed in persuading us to accept the second-class status Kennedy lays out for us?   Not me, what about you?

Note how in Gallagher's warped mind not being able to force one's views on all equates to "second class status."  Meanwhile, in 29 states gays can be fired at will and face duiscrimination because of people like Gallagher.  The piece goes on:

GALLAGHER: The legal implications are vast. I think this is, in fact, Roe v. Wade. The majority on the Supreme Court has clearly accepted that our Founding Fathers guaranteed us all a right to gay marriage in our Constitution, and is just prudentially biding its time — probably two to three years at most — before a case with clear standing gets in Justice Kennedy’s hands.

I think we are now in the post-Roe phase. Will we accede to the Court’s right to rule our values on marriage or not? And of course into the ever-more-intense religious-freedom phase.

I don’t think gay marriage is inevitable. But if the Supreme Court imposes it, of course it will happen.

With Kennedy’s judgment, and his contempt of dissent, we’ve entered into a new era of the relationships between the American political order and traditional Judeo-Christian moral views.

There's more blather, but you get the drift.  Gallagher and her kind have no problem with the imposition of beliefs and  social views as long as they are the ones doing the imposing on others.  No one has more contempt for the rights of others or is more self-centered and selfish than today's "godly folk" who make the case of why conservative Christianity needs to die.