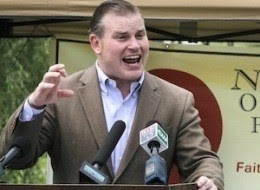 For those who have followed the National Organization for Marriage's  ("NOM")always disingenuous claims that the organization's sole concern is to "protect marriage," learning that NOM is now alleging that being gay is incompatible with being a patriotic American  will come as no surprise.  NOM's true agenda has ALWAYS been to denigrate gay citizens and depict us as being "other" and/or a threat to normal society.  Metro Weekly looks at NOM's latest foul anti-gay propaganda campaign which is merely an extension of its campaign to depict us a should be pedophiles and much worse.  Here are excerpts:

In a fundraising email sent late Wednesday hours before 4th of July celebrations kick off across the nation, the National Organization for Marriage (NOM) implied being an American and being LGBT or pro-LGBT are incompatible.

"We're a republic founded on the principles of religious liberty, freedom and democracy, endowed by our Creator with inalienable rights. We're a nation where citizen rights come from God, not from government, and where the people are sovereign, not politicians or judges," NOM President Brian Brown wrote in an email to supporters. "But those principles are under siege, by the culture, by our federal government and, increasingly, by the US Supreme Court."

Attached to Brown's email was a simple image of an American flag juxtaposed next to an LGBT Pride flag with the caption, "Which Banner Will You Choose?" -- seemingly implying that a choice must be made between being an American and being LGBT or pro-LGBT.

NOM's fundraising email comes one week after another set of losses for the organization, when, on June 26, the Supreme Court ruled in two cases to strike down Section 3 of the Defense of Marriage Act and return marriage equality to California.

"If we do not fight back against these governmental attacks on our fundamental right to act in the public square in support of the truth of marriage as God created it, then none of our cherished liberties and rights are safe," Brown wrote.

Calls to NOM's offices for comment on the implication that being American and LGBT are mutually exclusive[were not returned].


NOM. Brian Brown, Maggie Gallagher and NOM's financiers in the Vatican and the Knights of Columbus are despicable.