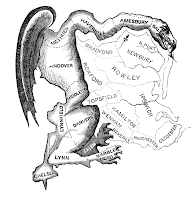 Since it started last month, the 2013 session of the Virginia General Assembly has seen repeated attempts by the Republican Party of Virginia to utilize gerrymandering and a proposed change in the way Virginia's Electoral College votes are distributed to steal elections and subvert the will of a majority of Virginia voters.  The first effort to fall was the attempt to change the Electoral College votes in a manner that would allow a Republican presidential candidate who failed to win a majority of the statewide vote to nonetheless  carry Virginia for Electoral College purposes.  Thankfully, today the second effort - which sought to u utilize a surprise effort to amend the state senatorial districts to insure a GOP majority in the Virginia Senate for years  to come likewise failed.  Frighteningly, both measures failed solely because a few honest Republican legislators (a truly dying breed) refused to participate in the virtual coup d'etat effort.  The Virginian Pilot has details on today's events. Here are highlights:

A controversial plan to tilt state Senate districts in Republicans' favor died at the other end of the Capitol on Wednesday, thanks to a procedural move by Republican House Speaker William Howell that could restore a spirit of cooperation to a sometimes fractious General Assembly.

The far-reaching redrawing of Senate district lines was sprung on unsuspecting Democrats last month when the absence of Sen. Henry Marsh, a Richmond civil rights attorney away from the Capitol Jan. 21 for the presidential inauguration, gave the GOP the edge it needed to ram through the plan.
That move heightened partisan rancor in the legislature's upper chamber, which is split evenly between the two parties.

The Senate redistricting plan was grafted onto legislation (HB259) that made technical adjustments to House district boundaries adopted in 2011.

Howell ruled that such a sweeping change was not germane to the original bill and therefore an invalid addition to it.

During a roughly six-minute speech, Howell explained his thinking that the Senate modifications strayed "dramatically, in my opinion, from the legislation's original purpose of addressing relatively technical, minor, administrative adjustments to certain districts."

Howell's decision was praised by Democrats. Senate Democratic Leader Richard Saslaw said Howell demonstrated "a lot of political courage" and suggested the speaker's decision could pave the way for compromise on key policy initiatives, such as transportation funding, in the nearly three weeks remaining in this General Assembly session.

Democrats denounced it as an unconstitutional sneak attack that put 46 percent of Virginians in new Senate districts and packed blacks into a handful of territories to reduce their overall voting strength.  They threatened to retaliate by withholding support of Republican Gov. Bob McDonnell's legislative initiatives, notably his signature transportation funding package.

Howell's move on Wednesday may not be enough on its own to save McDonnell's transportation initiative, which was rejected by the Senate on Tuesday, but it seems like a step toward restoring cooperation at the Capitol.

Kudos to Speaker Howell for doing the right and honorable thing.  Sadly, Howell is a rapidly vanishing breed in today's Virginia GOP where honesty, integrity and common decency have retreated  in the face of dictates from the Christofascist and Tea Party elements of the GOP base.  Democrats and the public at large need to understand that the GOP - both at the state and national level - have nothing but contempt for most Americans and continue to seek to overthrow democracy and place an oligarchy in its place.