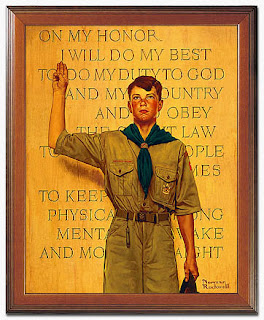 Caught between declining major corporate donor contributions and declining membership one the one hand and the anti-gay hatred that motivates organizations like the Catholic Church, Mormon Church and Southern Baptist Convention which, among others, provide meeting locations for the majority of scout troops and packs, the leadership of the Boy Scouts of America have opted to delay making a decision on whether to drop the current national ban on gay scouts and scouting officials.  I suspect that the BSA is going to be whip sawed no matter what it decides, so delay is only going to serve to postpone the ultimate firestorm that awaits.  CNN looks at the decision to delay:

We're going to have to wait a bit longer to see whether the Boy Scouts will drop their across-the-board ban on openly gay members.

The Boy Scouts of America on Wednesday delayed its vote on a proposal to let local troops decide whether to allow openly gay members and leaders.

The organization, which had been expected to vote Wednesday, said it needs more time to get input from its members. The vote will now be held in May.

"After careful consideration and extensive dialogue within the Scouting family, along with comments from those outside the organization, the volunteer officers of the Boy Scouts of America’s National Executive Board concluded that due to the complexity of this issue, the organization needs time for a more deliberate review of its membership policy," the group said Wednesday morning.

"To that end, the executive board directed its committees to further engage representatives of Scouting’s membership and listen to their perspectives and concerns. This will assist the officers’ work on a resolution on membership standards. The approximately 1,400 voting members of the national council will take action on the resolution at the national meeting in May 2013."