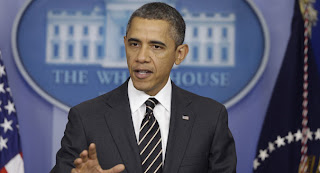 With the mandatory sequestration just a month off all signs are that the Congressional Republicans prefer trashing the U. S. economy over any deal with Obama.  The irony is that many in the U. S. military and those in the defense industry who vote Republican out of a knee jerk reaction are about to have their illogical allegiance to the GOP bite them in the ass big time.  But for the looming damage to the larger economy, it would almost be tempting to see these feckless voters reap the rewards of the brain dead politics.  Meanwhile, Barack Obama - seemingly the only grown up involved - is proposing a deal to delay the sequestration's impact.  Politico looks at Obama's effort and the likely economic saboteur reaction that may come from the knuckle draggers in the House of Representatives in particular.  Here are highlights:

President Barack Obama will call on Congress at Tuesday to pass a package of short-term spending cuts and tax reforms in an effort to head off the looming automatic, across-the-board sequester cuts, a White House official tells POLITICO.

“Given that the budget process in Congress won’t likely be completed by March 1,” the official said, the proposal “will allow Congress more time to reach a solution that permanently avoids the sequester and significantly reduces the deficit in a balanced way.”

Uncertainty around the sequester is already having a negative impact on our economic growth, and if it was to take effect it would cost hundreds of thousands of American jobs and have devastating impacts on our economy,” a White House official said in a statement. “The President will urge Congress to come together and act to ensure these devastating cuts to defense and job-creating programs don’t take effect.”

The sequester was part of the Budget Control Act passed by Congress and signed by the president in 2011, and was set to take effect if Congress could not agree on a set of cuts totaling $1.2 trillion. It was billed as a trigger to force agreement, but no agreement materialized. The cuts, set to take effect in just over three weeks, will slash defense and non-defense spending.

Boehner signaled that he was not interested in a deal that would raise tax revenue, even temporarily. In a statement Tuesday, he blamed Obama for the creation of the sequester, saying the president is the one who “insisted it become law” and noting that House Republicans have already passed bills that would have averted the cuts. The Senate has not acted on those bills.

The president, however, is hoping to gain a political advantage by continuing to press his case in the court of public opinion. “While we need to deal with our deficits over the long term, we shouldn’t have workers being laid off, kids kicked off Head Start, and food safety inspections cut while Congress completes the process,” the White House official said. “With our economy poised to continue to strengthen this year, the president will make clear that we can’t see another self-inflicted wound from Washington.”

The reality is that the GOP cares nothing about the majority of Americans.  As a party, the GOP's sole concern is pandering the religious extremists and unhinged Tea Party demagogues.  The rest of us simply do not count.
Posted by Michael-in-Norfolk at Tuesday, February 05, 2013