The GOP’s Real Problem: A Refusal to Repudiate the Bush/Cheney Disaster and the Ideology That Cause It 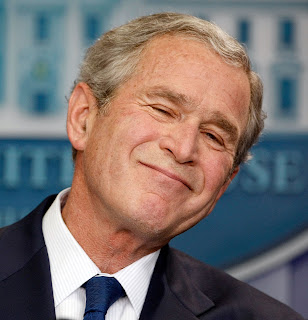 I exited the Republican Party as the Bush/Cheney nightmare began.  As noted many times before, one of the big reason for my exit was the fusion of the GOP and the Christofascists.  Related to it was the GOP rejection of logic and reason and the embrace of extremism that lead directly to the fiascoes in Iraq and Afghanistan.  I still remember watching the news as the cretinous George Bush announced the launch of the Iraq War - a war based on lies and a deliberate duping of the American public.  Add to the military disasters - which have needlessly thrown away thousands of American lives - the bankrupting of the country and the setting of the stage for the economic melt down, and one gets the root of the nation's current debt crisis and continued economic malaise.  Yet no one who is still in the Republican Party will take ownership and responsibility.  They - and this include some former GOP colleagues - rant about run away spending under Obama, yet the real debt explosion occurred on their lawless teams watch.  Andrew Sullivan sums up the problem well in a statement of the real historic facts that need to be daily thrown in the face of every member of the GOP when then start bloviating about the need for spending cuts.  Here are highlights:

When you have a party that hasn’t been able to repudiate the worst administration in modern times, and actually still attempt to hail it as some kind of achievement with respect to Iraq or Afghanistan or the debt, you cannot persuade anyone you have changed, or want to change.

Someone in the GOP needs to take Bush-Cheney apart, to show how they created the debt crisis we are in, by throwing away a surplus on unaffordable tax cuts, launching two unfunded wars, and one new unfunded entitlement. They need to take on the war crimes that has deeply undermined the soul of the United States. They need to note the catastrophic negligence that gave us the worst national security lapse since Pearl Harbor (9/11) despite being warned explicitly in advance, accept weak and false intelligence to launch a war they were too incompetent to fight or win, sat back as one of the worst hurricanes all but took out a major city, and was so negligent in bank regulation that we ended up with Lehman and all that subsequently took place.

These were not minor errors. They were catastrophic misjudgments which took an era of peace, surplus and prosperity and replaced it with a dystopia of massive debt, a lawless executive branch, two unwinnable wars, and a record of war crimes that had their source in the very Oval Office.

When will the Republicans hold themselves accountable for the things that have persuaded so many that this bunch of fanatics and deniers are unfit for government? When will they speak of Bush and Cheney and repudiate them?

The answer to Andrew's question unfortunately, never.  Those who saw the errors and would demand accountability have either been driven from the GOP or have exiled themselves because they could no longer stand the insanity, hate and bigotry.

Posted by Michael-in-Norfolk at Saturday, February 09, 2013