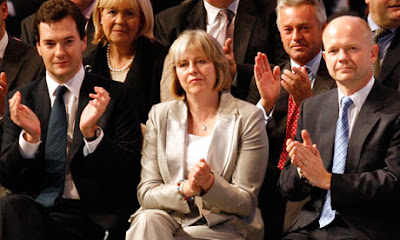 As the DOMA and Proposition 8 cases await oral argument next month before the U. S. Supreme Court, America's longest standing ally prepares to vote on marriage equality at 7:00 PM this evening London time.  Meanwhile, over the weekend, France, the American ally that helped win the America war for independence likewise took a huge step towards marriage equality.  One can only wonder whether America will join the movement toward modernity or whether it instead will show it's promise of liberty and religious freedom is all form and no substance.  In the United Kingdom, the conservative government - that's right, its the conservative Tory government leading the marriage equality charge - is pulling out the stops to garner votes for marriage equality.  Here are highlights from a piece in the Daily Telegraph authored by George Osborne, the chancellor of the Exchequer, Foreign Secretary William Hague and Home Secretary Theresa May (pictured above):

SIR – Today the Commons will vote on the Bill to allow same-sex marriage.
Civil partnerships for gay couples were a great step forward, but the question now is whether it is any longer acceptable to exclude people from marriage simply because they love someone of the same sex.
Marriage has evolved over time. We believe that opening it up to same-sex couples will strengthen, not weaken, the institution. As David Cameron has said, we should support gay marriage not in spite of being Conservatives, but because we are Conservatives.

Our party also has a strong belief in religious freedom, a vital element of a free society. The Bill ensures that no faith group will be forced to conduct same-sex marriages. The legal advice is clear that these protections for religious groups cannot be overturned by the courts.

Religious freedom works both ways. Why should faith groups, such as the Quakers, that wish to conduct gay marriages be forbidden from doing so? This Bill will enhance religious freedom, not restrict it.

Attitudes towards gay people have changed. A substantial majority of the public now favour allowing same-sex couples to marry, and support has increased rapidly. This is the right thing to do at the right time. We will be among the Conservative MPs voting for this Bill today.

Needless to say, the Britsh equivalents of American Christofascists and the child rapist protectors of the Roman Catholic Church are howling.  They have no regard for real religious freedom for all.  They merely seek to force their beliefs on all Britons.  As a piece in The Guardian notes, supporters of marriage equality are also citing Margaret Thatcher as a model for conservative MP's:

The chancellor, foreign secretary and home secretary made their case as other Tory supporters of equal marriage made an eleventh-hour plea to fellow Conservative MPs to vote in favour of reform by invoking the record of Margaret Thatcher, who supported the legalisation of homosexuality in the 1960s.

Amid fears in No 10 that David Cameron may struggle to win the support of a majority of his MPs in a free vote in the Commons on Tuesday, reformers are pointing out that Thatcher set herself apart from Tory traditionalists who described the bill legalising homosexuality as a "dirty measure".

The surprise intervention of the cabinet's heaviest hitters suggested the bill was in line with Conservative values and strengthened both marriage and religious freedom.