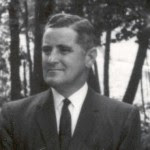 Last week Harry Lee Carrico (pictured at left), a former Chief Justice of the Virginia Supreme Court died and, if one were to believe the gushing press coverage in some quarters, one would think that Carrico was a pillar of judicial honor, valor and decency.  The press in its rush to praise Carrico has displayed a shocking form of amnesia - a type of amnesia all too prevalent in Virginia.  Forgotten in too much of the coverage of the 96 year old Carrico's death is that when a case called Loving v. Virginia reached the Virginia Supreme Court, Carrico wrote a unanimous opinion upholding the state’s miscegenation laws.  That's right, the Virginia Supreme Court ruling unanimously upheld the state's racist miscegenation law.  It's a mindset still alive and well at the Virginia Supreme Court.  A few years ago when I argued before that court on behalf of a state employee who was fired for being gay, the current Chief Justice, Cynthia Kinser (a former classmate of mine) appeared incensed at my suggestion that firing employees for being gay was a form of religious discrimination that the Court needed to strike down under the U. S. Constitution.  Instead, the Court followed Carrico's tradition and sided with bigotry.  A piece that reviews Carrico's true legacy is telling.  Here are highlights:

One of the infuriating things about Virginia is that one can never get away from its tendency to spin myths and construct a separate universe especially when it comes to what actually happened in its history.

A case in point is the coverage of the death of 96-year-old Harry Lee Carrico, the former chief justice of the Virginia Supreme Court, who figured in a landmark case involving racist, white supremacist laws during the Civil Rights era.

I realize that it may be bad form to criticize the recently dead, but the Carrico case is really quite recent and his important legal decision was so obviously wrong. Somehow this goes unmentioned in newspapers such as the Richmond Times-Dispatch which even under the ownership of Warren Buffett keeps trying to spin its own skewed version of the Old South.

The story starts in 1966 when Richard and Mildred Loving, a white man and African-American woman, decided to move back home to Caroline County from Washington where they had been legally married. Virginia was one of a dozen states back then that made it a crime for a white and a black to be married.

Police burst into their home in the middle of the night and arrested them. They were sentenced to a year in prison but the sentence was suspended if they agreed to leave the state. They appealed to the Virginia Supreme Court where Carrico wrote a unanimous opinion upholding the state’s miscegenation laws.

It didn’t take the U.S. Supreme Court long to squelch Carrico’s opinion which incredibly didn’t consider such critical earlier rulings, such as Brown versus the Topeka Board of Education, which ended the racial segregation of schools. In 1967, the high court said:  “There is patently no legitimate overriding purpose independent of invidious racial discrimination which justifies this classification. The fact that Virginia prohibits only interracial marriages involving white persons demonstrates that the racial classifications must stand on their own justification, as measures designed to maintain White Supremacy.”

Mind you this wasn’t 1848 or 1861 or 1896. This was 1966.   .  .  .  .  It really wasn’t all that long ago, yet Carrico was issuing rulings such as this.  .  .  .   To be sure, it is said that Carrico’s ideas about African-Americans changed as he grew older and he backed more minorities in the legal profession. But to ignore his most important ruling and to go on about how he always removed his Fedora when talking to a lady and how he was the longest-serving judge ever is a bit much.

Carrico is quoted as having said that he loves Virginia for its “sense of integrity” and that “there is just something about Virginia that makes her unique. I hope she’ll always be that way.”

In fact, Virginia is a state that desperately needed change. Carrico had the chance to make his mark and failed.