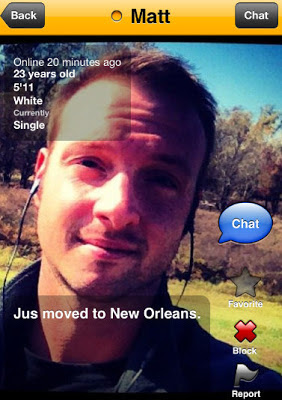 One of the biggest lies and farces disseminated by Christofascist organizations and those willing to sell themselves in what to me is the equivalent of prostitution but without the honesty is the "ex-gay" myth.  And just as routinely as the sum rises in the East, we see supposedly "cured" individuals in the "ex-gay" movement proving that they are anything but "ex-gay."  The list of fallen "ex-gays" is long and continues to grow: John Paulk and Michael Johnston are but two of the more notable and even Alan Chambers at Exodus International has conceded that no one ever really becomes heterosexual. Now Matt Moore who writes for the anti-gay Christian publications.  Here's a profile of Moore from the Christian Post that contains all of the usual elements we have come to expect from dishonest "ex-gays for pay":

Less than two years ago Matt Moore's life was completely transformed when he put his faith in Jesus Christ. Having indulged himself for years in heavy drinking and a homosexual lifestyle, his life changed drastically when he realized he needed to submit to God and His view of homosexuality according to the Bible. Today, Moore is using his testimony to reach out to others and show them how God is powerful enough to save anyone in the midst of their struggles with all types of sin.

Moore's recent blog post on CP Blogs titled, "My Story: Homosexuality, Drunkenness, Grace and Redemption," has been wildly popular and has led many people to express their appreciation for his honesty about something that is certainly difficult for him to discuss.

Pleaze!  Are there any "ex-gays" who aren't former drunks, drug addicts or prostitutes?  In any event, the image above shows the real story.  Yes, it's Moore on Grindr looking for sexual hook ups.  One seriously has to wonder when tortured individuals are going to stop buy the lies cynically disseminated by PFOX, NARTH and similar snake oil merchant organizations.  Not surprisingly once caught, Moore put out a statement containing the faux contrition that is quoted here along with the blog author's commentary:

I contacted Moore, who responded as follows:


The grindr profile was really mine. I’ve been on it on and off for the last couple of weeks.
Like I told the guy who sent you the picture, I am wrong in having been on grindr. I haven’t changed my views on homosexuality, the bible, etc.
Creating a grindr profile and talking to guys on it was major disobedience on my part….disobedience to Christ. Disobedience to a loving and gracious God. Thankfully, I believe that He forgives me for this disobedience. I believe the blood of Christ covers this disobedience. And I won’t be on grindr again….ever.
The pastor of my church and the church body I am a part of were informed about me being on grindr (I told them) before all of this came out, publicly.

While I’m glad that Moore chose to own up to this rather than continuing to make excuses as others have done in the same situation, it’s disappointing that he ever put himself in such a deceptive and hypocritical situation in the first place. So-called “ex-gays” publicly promote the notion that LGBT people are sinning against a god who will torture them eternally if they fail to suppress and deny their true nature. But privately, they often seem to have trouble practicing what they preach. They proudly tell queer youth that their lives will be cursed with misery, illness, violence, addiction, a lack of meaningful human connection and an untimely death, unless they follow a faith that demands nothing less than the utter negation of who they are. Then they turn around and happily jump right back into a life that supposedly carries these most terrible consequences. And isn’t it wonderful how easily they can choose to forgive themselves for all this?

As I've said before, tawdry whore are far more virtuous than your typical "ex-gay."  "Ex-gay" therapy needs to be made illegal nationwide with strict penalties applied to those who peddle these damaging lies and bullshit.