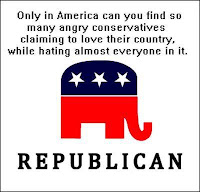 There continues to be much talk about the Republican Party seeking to change its messaging if not the substance of its policies.  On the social issues component of this endeavor, however, the GOP faces a major problem: its Christianist base that refuses to tone down its hate and bigotry.  Making maters even worse, a new Pew survey found that the image of the GOP as a creature of the Christofascists is harming the party's competitiveness with non-Christian and the non-church going voters. Among Jewish voters, in fact, Muslims have a higher favorable rating than Christofascists.  Of course, all of this is the result of the GOP's cynical decision to court Christofascists a number of years ago and, worse yet, start electing them to local city and county committees and caucuses.  Here are highlights on the new survey findings:

In 2012, many political reporters suggested that the issue of Israel would be pivotal for Jewish Americans, and it did feature prominently in both campaigns. Yet in the end, the issue did not seem to affect the voting decisions of most Jewish voters, 69% of whom backed President Obama. If the question of Israel did not move many Jewish voters, what did? Although it was not discussed widely during the campaign, one of the most influential factors for Jewish voters was the Christian Right.  .  .  .  in the case of Jewish voters, the close association between the GOP and the Christian Right proved to be profoundly important.

Few social groups are further apart in their politics than conservative Christians and Jews. In 2012, the Public Religion Research Institute conducted a survey of Jewish voters. That survey painted a portrait of a group that remains one of the most socially liberal in the U.S. American Jews strongly support legal abortion (93% say it should be legal in all or most cases) and favor allowing gays and lesbians to marry (81%). Conservative Christians, by contrast, are strongly opposed to same-sex marriage (78%), and most believe abortion should be illegal in all or most cases (65%). However, the two groups are not just divided on social issues. Both groups also embrace very different perspectives on cultural pluralism, religious traditionalism, and church-state separation issues.

The challenge confronting the GOP as it attempts to broaden its base is not limited to Jewish voters. A survey conducted by Pew last year found that more than six in ten (61%) non-Christian affiliated Americans (a group that includes Hindus, Jews and Muslims) agreed that “religious conservatives have too much control over the Republican Party.” Nearly two-thirds of religiously unaffiliated Americans also affirmed this statement. These groups are among the fastest-growing religious communities in the U.S.

Posted by Michael-in-Norfolk at Thursday, February 07, 2013